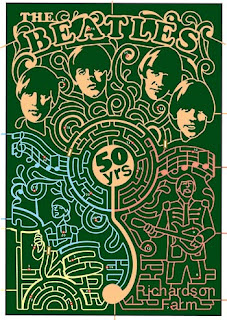 Maybe I’m A Maze. The Richardson Adventure Farm, located between Richmond and Spring Grove, IL, toward the Wisconsin border, has been creating a different corn maze for 13 years. The 2013 design is a tribute to The Beatles’ 50th Anniversary. Judging from the artwork on the Richardson Farm website, it looks really cool.

Mary E. Donnelly, a regular contributor to the PowerPop blog will be reading from Boys Don’t Lie: A History Of Shoes on October 19th at the Book Cellar on Lincoln Avenue in Chicago. She’ll be joined by her editor Moira McCormick. The book, an extensive look at the Zion, IL band, Shoes can be pre-ordered now from the publisher, PurePopPress.

The always clever and eclectic copy band EXPO ‘76 has dubbed its gig opening for The Ides Of March at City Winery next Tuesday, Friendly Strangers in Black Sedans. Backed by the Total Pro Horns, EXPO ‘76 should compliment the Chicago-based group that recorded “Vehicle” very nicely. Incidentally, Ides Of March singer-guitarist Jim Peterik was the very first musician I ever interviewed. It was around the time of his Don’t Fight The Feeling solo effort (with the very fun “Naugahyde Heart”), and I was cub music reporter for my college newspaper, The Chicago Illini.

Dan Pavelich is a member of the power pop band The Bradburys; a music critic for The Kenosha News, and does a comic strip called Just Say Uncle. He’s also pretty good at putting together various artists holiday CDs that raise funds for worth causes. His latest venture is the Christmas Without Cancer CD, and he’s already lined up Mimi Betinis from Pezband, The Grip Weeds, Lisa Mychols, Jamie And Steve from The Spongetones, Bill Lloyd from Foster And Lloyd, Graham Elvis from The Elvis Brothers, and a number of other power pop and indie rock artists to contribute. But he’ll also need funding to produce it, which is why there is now a Christmas Without Cancer page on the Indiegogo funding site. Pavelich has reached $610 of his $2,050 goal, with 7 days left.

Singer-guitarist Jeff Charreaux from the band Ultraviolet Eye has a new side project called The Walker Brigade.  It’s a cover band that plays music by punk bands like The Clash, Wire, The Buzzcocks, and Joy Division.

Dot Dot Dot, one of the most frequently booked bands on the Chicago street festival circuit, recently announced on its website and Facebook that lead guitarist-vocalist Rose (the members usually go by first name only) will be departing in October. According to the emotionally charged post, she’s leaving to be with her family on the West Coast.

Rose and bassist-vocalist Lisa were both in the Palatine-based, four-woman cover band Catfight before forming Dot Dot Dot, which means they’ve been performing together for over 10 years. Finding a replacement could be tough, due to her strong ties with the other band members, and also because the deceptively demure musician was a crowd favorite for her ability to wield a surprising amount of guitar firepower. Hopefully, there will be a way that she can still record with the band. The Britannicas do it and their members live on three different continents. Dot Dot Dot will be playing next Saturday, 7:45 PM. at the Northalsted Market Days.
Posted by Terry Flamm at 12:37 PM