Orchestral Maneuvers At The Abbey 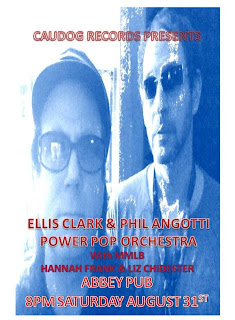 It’s likely Ellis Clark and Phil Angotti have crossed paths several times during their past few decades of performing on the Chicago music scene. They’ll be joining forces for the Ellis Clark And Phil Angotti Power Pop Orchestra show this Saturday night, August 31st at The Abbey Pub on the city’s northwest side. Both musicians have new releases to draw material from; Ellis with LP Number One and Angotti with Life And Rhymes. According to a Facebook event notice, they’ll be backed by drummer Dr. Brad and bassist Charlie Short.

Clark’s adventurous resume includes spending time with Epicycle, Social Act, and The Handcuffs, along with his solo outings. He’s also an A and R Director at CAUdog Records. Angotti has pursued power pop since kicking off his career with The Idea, and he’s explored more introspective material on his recent efforts. Both artists have done tribute shows (Angotti is particularly keen on McCartney and The Bee Gees), so who knows what might come up on what the Facebook event description calls “bonus songs.”