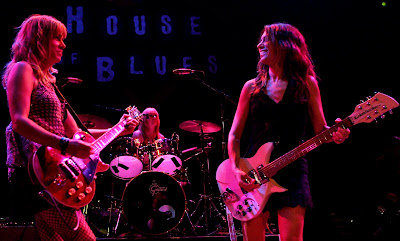 The Bangles performing at The House Of Blues - Chicago last Monday. Photo by Andy Argyrakis of the Illinois Entertainer.

Dance Like An Egyptian. As word comes that The Bangles will be performing on Dancing With The Stars this Monday night, I’m trying to remember if this was the same show that had The Go-Go’s perform live last season. Or was it American Idol? I generally avoid this type of program. Still, if it was Dancing With The Stars on both occasions, then the producers at least have good taste in all-women power pop bands.

He’s Got The Beat. Singer-guitarist Phil Angotti will be channeling Keith Richards as part of John Aselin’s Rolling Stones tribute on Friday, October 28th at The Abbey Pub. But he’ll be performing as himself tomorrow night at Beat Kitchen on Belmont in Chicago, along with Drive Train and Chris N. The show starts at 9:00 PM.

A Royal Musical. Martyr’s night club on Lincoln Avenue has seen its share of tributes to musical artists, and on October 24th, there will be a one-night only performance of a musical concert stage play based on Prince’s Purple Rain movie. Purple Rain Live is being directed by Dre Robinson, with musical direction by Mike Przygoda. A Terrible Spaceship will serve as the opening act.

Confessions In Sin City. Pat DiNizio of The Smithereens has put together a multimedia solo revue called Confessions Of A Rock Star and he’s bringing it to The Riveria Hotel in Las Vegas for a limited engagement. The show will incorporate photos, footage, and DiNizio’s live performance of songs by The Smithereens, The Beatles, and Buddy Holly songs, as he explains how he went from being a garbage man to a power pop icon via a bass-thumping ditty called “Blood And Roses.” Confessions of a Rock Star will run Wednesday - Monday at 7:00 PM, starting November 2nd.

Aliens In Joliet. Four members of the impressive 1960s tribute band New Invaders will be performing under the name Space Invaders tomorrow night at Paulie’s Pub in Joliet. Show time is 9:00 PM. By the way, The New Invaders have named The Hollies as the October Featured Artist of the 60s in their monthly newspaper. The band has at least four songs by Manchester’s Finest in its repertoire.

Like Footloose - - - With Gore. A Cowardly Scarecrow unearthed its Musical Of The Living Dead at The Charnel House on Fullerton Avenue last night, and it will rampage there through November 12th. The show, which sports the tagline, “Sometimes They Come Back . . . And Sing!!” features book and lyrics by Marc Lewallen and Brad Younts, and music by Mary Spray.