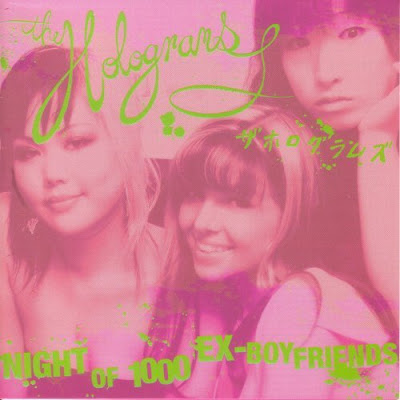 Another scary song rerun for the weekend. I originally did this post in 2009.

Not to be confused with the Jem and the Holograms TV show that ran from 1985 to 1988, the all-woman band The Holograms released its debut, Night Of 1,000 Ex-boyfriends in 2005. The first I heard of The Holograms was when Little Steven started playing the relentlessly peppy “Are You Ready For It” on his Underground Garage radio program. That song doesn’t prepare a listener for the nasty streak that runs through the rest of the CD, where the band performs songs like “Drunk Dial,” and “Your Ex Is Turning Tricks Again.”

Similar to The Buzzcocks, The Holograms mix revved-up punk with infectious melodies, while vocalist-guitarist Tammy taps into the 1960s girl group sound in a way that recalls Julie Brown’s “Homecoming Queen’s Got A Gun.” On “Death Boy,” a song with a frantic, guitar-driven arrangement, Tammy purrs, “Death boy, you’re so cute in such a creepy way.” She goes on to lament his passion for gals who are no longer living. “I know you’ll never be true./You only wish I was Code Blue.” Another downside to the relationship is that he brings her funeral wreaths instead of flowers.

I couldn’t mention this song without giving a shout out to Desiree Burcum, who wrote a similar song called, “Dead Guy” back when I was performing with the Famous In The Future comedy group. In her version, a woman falls for the victim she accidentally ran over with her car, noting that he doesn’t do all the obnoxious things her living boyfriends have always done. Desiree also came up with the line, “Does he have a dead brother?” before it was used in Corpse Bride.