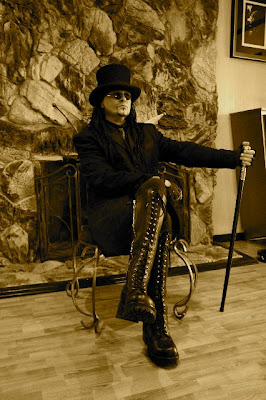 This man knows his spiders and snakes. Photo from the Ministry Facebook page.

Each weekend in October, I've been featuring Halloween song profiles that were previously posted here in October 2009 or 2010. Or in this case, both.

First, best wishes to WXRT DJ Terri Hemmert for a speedy recovery. According to her Facebook page, Hemmert experienced a scare earlier this week that had nothing to do with Halloween. Fortunately, the health crisis was ably handled by doctors, and she's feeling better now. Normally Hemmert hosts the Breakfast With The Beatles show on WXRT each Sunday morning, but this week it's being replaced by an Acoustic Sunrise Special featuring Chris Martin and Johnny Buckland of Coldplay. Fans can hear a live stream at the WXRT website.

Hemmert promises that she and Breakfast With The Beatles will be back on the air next week.

With its playful “bop bop bop bop” scat singing and dance club-ready synthesized beats, it’s easy to think of Ministry’s “Everyday Is Halloween” as a happy party song. Even the opening lines, “Well I live with snakes and lizards/And other things that go bump in the night” seem to promise dark fun in a Danny Elfman/Tim Burton kind of way. A beer company even used the song for a beer commercial.

But lead vocalist/founding member Al Jourgensen has actually fashioned a defiant anthem for people who are rejected by society for looking or acting differently from everyone else. “People seem to stop and stare they say/Why are you dressed like it’s Halloween/You look so absurd, you look so obscene.” The lyrics later ask, “Why can’t I live a life for me?/Why should I take the abuse that’s served?”

The song acts as a sort of mist-shrouded bridge from Ministry’s early Cold Life/With Sympathy techno days to its later incarnation as an aggressive death metal band. “Everyday Is Halloween” keeps people moving on the dance floor with over six minutes of melodic keyboards and dj scratching, but it would be nice if they also absorbed Jourgensen’s plea to be more tolerant.