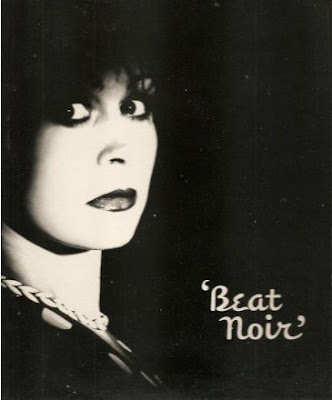 Here's another Halloween song profile that has been previously been posted on Broken Hearted Toy.

The English band Fingerprintz zipped through a variety of genres during a brief career that lasted from 1979 to 1981. They played punk on their debut, The Very Dab, moved on to power pop with Distinguishing Marks, and by the time they released Beat Noir, they were into techno. One thing that remained constant was lead singer-guitarist Jimme O’Neill’s penchant for matching disturbing lyrics with catchy melodies.

“Shadowed,” from the aptly titled Beat Noir, offers intergalactic espionage set to a pulsating dance club arrangement. There’s a breathless chase down dark streets involving “an alien presence” and our hero. “Outside forces, foreign bodies in the atmosphere/I’ve got to shake them off and rub them out and get away from here.” Guitarist Cha Burnz throws in one of his distinctive solos, and O’Neill’s echo-laden vocals evoke U2, especially if Bono had been into comic books and sci-fi movies.

Sadly, none of the Fingerprintz albums are available on CD or iTunes. O’Neill and Burnz went on to form The Silencers UK and had a moderate hit with “Painted Moon.”