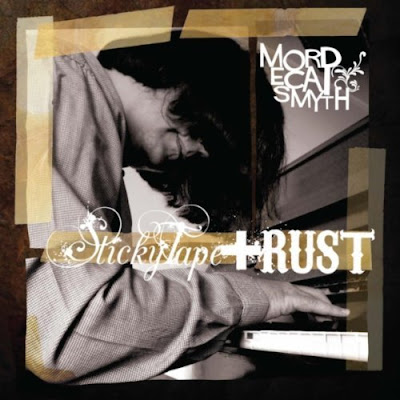 Tom Waits Alert! B1G T1ME, the Tom Waits tribute band will be performing two sets of the gravely-voiced singer-songwriter’s tunes at Quenchers in Chicago on Wednesday, October 19th. The group will be joined by saxophone player Cameron Pfiffner and guitarist Tom McCarthy. Quenchers is located at 2401 N. Western in Chicago. Showtime is 9:30. In other Tom Waits news, I just heard on WXRT that he’ll have a new CD coming out soon.

You’d expect to encounter a certain amount of silliness on the debut from a band called Mordecai Smyth, and Sticky Tape & Rust offers plenty along those lines. The first act signed to the fledgling indie label Mega Dodo, Mordecai Smyth draws upon the satirical side of the original British Invasion, with an added dose of vintage movies and TV shows. The lyrics often deal with murder, mayhem, and the supernatural, but in such an absurd way, listeners are more likely to be amused than frightened.

Georgina Jones might not be as well known to Yanks as Emma Peel, but she was also a 1960s Brit TV heroine who was as cunning as she was beautiful. Mordecai Smyth honors her with “Georgina Jones,” a Doors-like song with peppy keyboards and lines like, “Crooks and villains better watch your step” and “She’s got a beautiful way of getting under your skin.” The spirit of Syd Barrett surfaces on “Sinister Cyclist,” which depicts a witch who travels on two wheels instead of by broom, as well as on the satirical portrait, “Herbert Frowsy.” “All Right Now” harks back to the days of England's music halls for a bump and grind look at being a werewolf.

The spooky “Mr. Hitchcock” uses a more modern power pop arrangement, while “Don’t Cross Colin” taps into The Undertones, as well as The Who’s “Happy Jack.” “Almost Murder Ballad” is a dark tale of a guy whose various attempts to bump off his lover all fail until he decides to just give up, but for true romantics, there’s some innocent, old-time crooning on “I Love You.” If you’re still looking for some songs for your Halloween party playlist, you can’t go wrong with Mordecai Smyth's Sticky Tape & Rust.