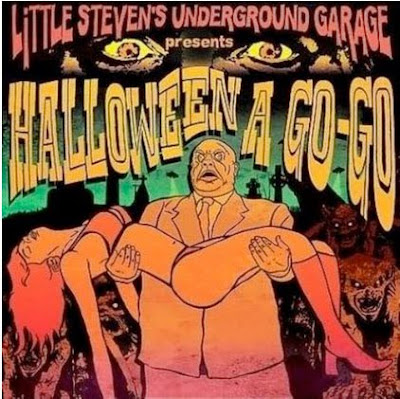 Snackstock 2011 A Benefit Concert For Ovarian Cancer is being held from 1:00 PM to 5:00 PM tomorrow, October 9th at Austin’s Fuel Room in Libertyville, Illinois. The event is being sponsored by Snack King Photos. Goin’ South, the southern rock cover band often profiled by Willy Deal in his On The Road With Willy segments for the Sunday Morning Coffee With Jeff internet show, will be performing, along with Ordinary Outcast. Tickets for the all ages show are $15, or four for $30, with all the proceeds going to The Ovarian Cancer Research Fund.

And now here’s some more fun in a Halloween vein. Note: This review originally appeared in the Illinois Entertainer.

Halloween A Go-Go is a CD version of musician/radio host Little Steven Van Zandt’s annual October bash, minus the funny B-movie sound bites he sprinkles throughout his syndicated show. The consistently energetic tracks range from the 1950s rockabilly of Carl Perkins’ “Put Your Cat Clothes On” to the modern garage rock of The Stems, Minus 5, and Jarvis Humby. Not all of the songs qualify as bona fide Halloween fare.

The biggest stretch is “Restless Nights” by Bruce Springsteen and the E Street Band (which includes Van Zandt) although it does fit a nocturnal theme that includes a crown jewel of the garage movement, “I Had Too Much To Dream” by The Electric Prunes, as well as The Pretty Things’ psychedelic “Walking Through My Dreams.” Veteran garage rockers The Chesterfield Kings, who always seem to be in a Halloween party mood, check in with “Running Through My Nightmares,” while Howlin’ Wolf’s “Howlin For My Darling” offers spooky fun in a blues vein. The only dud is the cornball oldie, “The Cool Ghoul” by John Zacherle. No doubt it was included for nostalgia, but any number of tracks would have been better, such as Metric’s “Monster Hospital” or Don Dixon’s “Praying Mantis.”