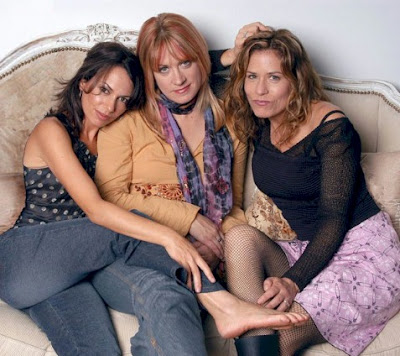 It was exactly 23 years ago when Los Angeles Mayor Tom Bradley declared February 23rd Official Bangles Day in his city. I only know this because the anniversary is mentioned on the band’s website. The Bangles probably aren’t being handed the keys to many cities these days, but original members Susanna Hoffs, Debbi Peterson, and Vicki Peterson still tour and are actively working on a new CD. It will be a belated follow up to 2003’s Doll Revolution, and their first without bassist Michael Steele, who left the band a few years back.

Doll Revolution was one of those rare reunion albums that found a band sounding just as strong as ever. A rousing rendition of Elvis Costello’s “Tear Off Your Own Head” led the way, and there were also highly energetic songs like “Ride The Ride,” “Here Right Now,” and “Between The Two.” True, the techno-oriented “Something That You Said” was an obvious attempt at a hit single, but the most noticeable thing about Doll Revolution was that The Bangles were following their own instincts rather bowing to any corporate mandate. That sense of freedom is still evident in the band’s live performances, and bodes well for the new recordings.

The Bangles website offers a firsthand perspective from drummer-vocalist Debbi Peterson on how things have gone on the nine tacks the band has worked on so far. “It's really been a joy to put this album together without anyone breathing down our necks,” Peterson noted. “Just taking our time to do it exactly the way we want to - it feels great, and I think it shows in the music.”

Guitarist-vocalist Vicki Peterson has also sounded optimistic on a series of Tweets under the name VickiBangle. Some of the recording was done at Matthew Sweet’s house, and he’s posted some positive things on Facebook about working with The Bangles.

The Bangles will be promoting the new release this Spring with dates in Chicago, Milwaukee, Minneapolis, and St. Louis. Since their long-time Australian mates, The Hoodoo Gurus, are also releasing a new CD, it would be great to see these two power pop bands on a double bill like they did back in the 1980s.