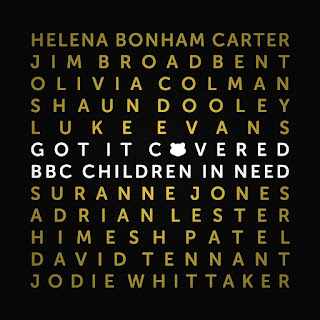 Today is release day for From Out Of Nowhere by Jeff Lynne’s ELO. Two weeks from now, we’ll see Juliana Hatfield Sings The Police from Juliana Hatfield; and November 22 brings Hyperspace from Beck, Losst and Founnd by Harry Nilsson; Thanks For The Dance from Leonard Cohen, and Who by The Who.

A big welcome to Jerry Seinfeld, who’ll be performing stand-up comedy tonight at the Chicago Theatre. Not that there’s anything wrong with that. Countless television viewers can recite catch phrases (and probably entire scenes) from Seinfeld’s eponymous sitcom. But he was already a legendary stand-up comedian for his clever and imaginative takes on everyday things like doing laundry or the way a dog reacts when its human returns from even the shortest time away. His current TV project Comedians In Cars Getting Coffee offers fascinating and funny insight on how comedians create and regard their work. By the way, I wore a puffy shirt the other day, but it wasn’t because I wanted to look like a pirate. It was part of my vampire costume for our company’s Halloween party.

Tickets went on sale today for Peter Asher at City Winery Chicago on January 3; Chicago at the Rialto Square Theatre on April 7; Juliana Hatfield at SPACE on January 16; NRBQ at Chop Shop on November 27; and Sons Of The Silent Age and Ready Freddies at Metro on January 11.

Next Saturday, November 9, QUAD CON will arrive in Burlington, IA the fourth destination on its quest to bring toys, comic books, art, and games to cities in the Midwest. Admission is free. QUAD CON will hit Rockford, IL on November 17.

Chicago-based power pop band The Collectors are changing their name to The Walkdown and have officially added vocalist Erica Loftus to their lineup. Loftus has made guest appearances with the Mike Mazza led group (as well as with Van Go) in the past and also sings lead for The Right Tidys. All of the above-mentioned acts are well-known to regular attendees of International Pop Overthrow - Chicago.

We lost Ric Ocasek a while back but we’ll never forget his contributions to cutting-edge music. You can appreciate the nocturnal allure he crafted with his songs when Tributosaurus becomes The Cars next Wednesday, November 6 at Martyrs’ on Lincoln Avenue.

Progressive rock fans should flock to The Raue Center For The Arts in Crystal Lake on Saturday, November 23. The six-member band Prognosis will be performing Six Of The Best, a tribute to Peter Gabriel; Genesis; Jethro Tull; Emerson, Lake, and Palmer; King Crimson; and Yes.

The Grand Rapids Comic-Con takes place November 8 – 10 at The DeVos Place in Grand Rapids, Michigan. The event will include celebrity guests, artists, and authors.

The Music On Stage theater group will present Annie The Musical from November 16 through December 1 at Cutting Hall in Palatine. In 2020, Music On Stage will be presenting The Sound Of Music and The Wizard Of Oz.

Jackson Galaxy, host of Animal Planet’s My Cat From Hell TV show, is coming to the Genesee Theatre in Waukegan, IL on January 17. Don’t look for me to make any jokes about my cats being from hell. They’re both perfect angels.
Posted by Terry Flamm at 4:48 PM