Reading And Writing And Rock And Roll 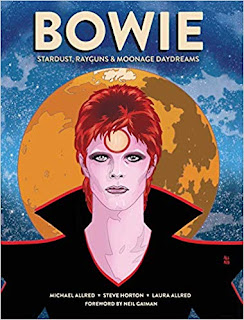 Insight Comics is releasing a 160-page hardcover graphic novel titled Bowie - Stardust, Rayguns and Moonage Daydreams that’s now available for preorder on Amazon. Steve Horton and Michael Allred are the writers, Laura Allred is the illustrator, and the foreword is written by Neil Gaiman. Laura Allred employs a colorful, realistic style that brings Bowie’s career, personality, and fellow musicians to life in a consistently appealing fashion. The book is due out January 7.

Chicago Tribune writer Debbie Carlson reviewed another hardcover David Bowie book in last Sunday’s Life+Travel section. It’s titled Bowie: An Illustrated Life and combines Maria Hesse’s art with copy by Fran Ruiz. Carlson described the book as being told from Bowie’s point of view and added that readers “meet many of the famous musicians he interacted with, including Iggy Pop, Brian Eno, Freddie Mercury and others.” Hesse takes a whimsical and fun approach to rendering Bowie’s story. It’s available on Amazon.

And if acquiring both of the above-mentioned Bowie books puts you in the mood to see some of his music performed live, Sons Of The Silent Age have a Ziggy Meets The Duke show coming up on January 11 at Metro. The critically acclaimed Bowie tribute band will be performing Ziggy Stardust and Station To Station in their entirety. The Queen tribute band The Ready Freddies will be the opening act.

Freelance writer Allison Stewart had an intriguing feature story about comedian/author Jenny Slate in last Friday’s Chicago Tribune. Slate was in town for a show at The Vic Theatre, and her new book Little Weirds has been picking up critical acclaim. Stewart describes it as “an abstract memoir-like collection of short pieces.” Slate currently has a standup show titled Stage Fright on Netflix,

Bridge, a literary publication that enjoyed a short run around the turn of this century, is making a comeback as a hardcover journal via a small group of creative individuals. Its mix of art, poetry, fiction, and essays draws inspiration from vintage periodicals like Tristan Tzara’s literature magazines and Wyndham Lewis’ Blast. The relaunched Bridge will have a freewheeling publishing cycle, based on when its creators feel they have the right amount of material to go to press. There will be a relaunch event for Bridge this Sunday, November 17 at 7:00 p.m. SITE/less at 1250 W. Augusta Blvd. in Chicago. Following the official relaunch, there will be a Bridge After Party at Montrose Saloon featuring The Thomas Comerford Band, Danny Black, and Eric Chial from The Bon Mots, and Decoy Prayer Meeting. It kicks off at 8:00 p.m. Montrose Saloon is located at 2933 W. Montrose.

On a personal note, I recently finished writing my fourth novel. It’s a Young Adult/rock and roll/romance/paranormal—hopefully funny—effort inspired by musicians like Alex Chilton and Steve Winwood who were already accomplished vocalists in their teenage years. My previous efforts (none published yet) are a suspense/satire novel based on Chicago’s punk rock scene in the mid-1980s, a Middle Grade fantasy/holiday novel, and a sequel to the Middle Grade fantasy. Three literary agents at a writers convention I attended last June liked my pitch and gave me the green light to submit my latest novel to them.

One of the requests literary agents often make is that writers provide examples of published (and successful) novels that are similar to the submission. It was during that quest that I discovered Maureen Johnson’s Truly Devious, a thoroughly enjoyable Young Adult/Paranormal/Mystery with a hint of romance and lots of clever humor. For its main character, Truly Devious gives us Stevie, a teenage girl who’s unique, funny, inquisitive, and at times, overwhelmed and frightened, the way any teenager would be at a new far-from-home school with a history of unsolved murders. I can’t wait for the second book of this trilogy to come out next month.

Finally, aspiring writers looking to connect with an agent or publisher should consider Chris Roerden’s Don’t Murder Your Mystery. An acquaintance highly recommended this writing guide so I recently bought a copy. Roerden has a decades-long career as an editor and offers essential tips from an insider’s point of view on how avoid common mistakes while submitting your manuscript. I’ve just started reading it can already tell it’s going to be extremely helpful.
Posted by Terry Flamm at 9:45 PM