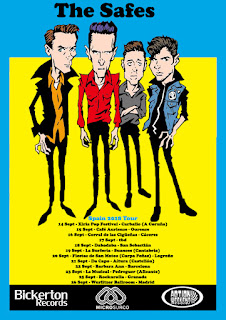 An older poster of The Safes, with that cool illustration.

To paraphrase the Bee Gees, there’s something I think worthwhile if a four-day weekend makes you smile. Especially one that kicks off the Christmas season. Some people will be out partying four nights in a row. Here are a few suggestions for where to celebrate over the Thanksgiving weekend.

Starting on a more serious note, this Saturday night’s three-band showcase at Martyrs’ will be a fundraiser for teenage musician Rylan Wilder. Wilder’s band Monarchy Over Monday was scheduled to perform at the Lincoln Avenue venue that night, but he was wounded when he was caught the crossfire of a shootout between the police and a robbery suspect a week ago. Wilder was working in the Upbeat Music and Arts store on Irving Park Road at the time of the incident. Proceeds from this Saturday’s show will go towards helping him cover his medical bills. Those interested in helping out but unable to make it to Martyrs’ can contribute directly at the Help Rylan Play Music Again GoFundMe page, which has already raised over $51,000.

Chicago-based alt-rock band The Safes are combining their 16th annual Black Wednesday bash with a record release party at Beat Kitchen on Belmont tomorrow night. Band member Frankie O’Malley describes the new effort Winning Combination as a “crazy album,” and they’ve been touring the country since mid-September in support of it. Shindig, the U.K. magazine every fan of 1960s and 1960s-influenced rock should be reading, gave it four stars, and other reviews have been positive. The ornate 1960s Brit pop approach on Winning Combination marks a new approach for The Safes, and it’s highly effective. The Safes also have some cool t-shirts, particularly one with an illustration of the band members. Maybe they’ll have some on sale at Beat Kitchen. The Differents, The Sonnets, and The Marcatos are also performing at Beat Kitchen tomorrow night. The music starts at 7:30 p.m.

Damn right, I’ve got the drumstick. Sopro Music’s Annual Thanksgiving Blues Revue Concert has been held in numerous venues over the years, and the 37th version takes place at the Cheers Nightclub in Midlothian this Saturday night. Long-time Sopro favorites such as The Chicago Horns—a first-rate jazz quartet—and acclaimed jazz-blues vocalist Deb Seitz will be on hand. Other musicians participating include vocalist-guitarist Joey Drada, bassist John Falstrom, drummer Scott Bonshire, and guitarist-vocalist Frank Anastos. Along with all that blues, there will be prize giveaways.

Beggars Banquet, a tribute band that’s been performing Rolling Stones music for close to 15 years, has a gig at Martyrs’ on Lincoln Avenue tomorrow night. In addition to playing all those great Rolling Stones hits, members of Beggars Banquet dress the part, appearing in full costume.

Val’s Halla Records in Oak Park will close at the end of this month, ending a 47-year run that attracted legions of loyal followers. Fans can honor the store’s legacy, as well as its late owner Val Camilletti, at a Black Friday bash being hosted there by the Ellis Clark/Ary Paloma Jeebie led band Big Hair Trouble. The Amazing Heebie Jeebies, Phil Angotti, Mark Panick, Gerald McClendon and The Soulkeepers, Phoenix, Frankie B, Hannah Frank, and John Kimsey will also be performing.

Chicago-based alt-rock/avant-garde band whitewolfsonicprincess will be performing at Montrose Saloon this Friday night. In addition to being musicians, vocalist Carla Hayden and guitarist-vocalist James Moeller are also the founding members of the Black Forest theatre group, and it’s fascinating to see and hear how they incorporate elements of that experience into their music. Flapunco, led by singer-photographer Lisa Zane, and International Pop Overthrow veterans Rollo Time are also on the bill. The music starts at 9:00 p.m.
Posted by Terry Flamm at 8:17 PM