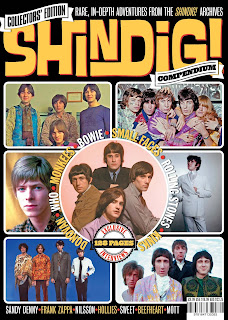 Here’s a Broken Hearted Toy welcome to Elvis Costello and The Imposters, who are in town for a gig at the Chicago Theatre tonight.

Depending on what time you see this, you might still be able to catch The Bishop’s Daredevil Stunt Club, LovePunch, and Dirty Blond performing songs from Twice Removed by Sloan and Blue by Weezer at Montrose Saloon. It’s the 25th anniversary for both of those LPs.

Tickets went on sale today for Black Crowes at the Hollywood Casino Amphitheatre on August 15; Cornerstones Of Rock with The Buckinghams, Ides Of March, New Colony Six, Cryan’ Shames, and Shadows Of Knight at The Arcada on November 30; The Sea and Cake at The Empty Bottle on February 29; and Vulgar Boatmen and Sunshine Boys at Schubas on January 11.

The Chicago-based U2 tribute band Without U2 joins forces with New York’s Dead Letter Office R.E.M. tribute band tomorrow night at Martyrs’ on Lincoln Avenue. The show starts at 9:00 p.m.

Shindig, the U.K. magazine that celebrates 1960s era rock and roll, has a special edition coming out just in time for holiday gift giving. A recent social media post promises, “Rare, In-Depth Adventures from the Shindig Archives” regarding Donovan, The Hollies, The Rolling Stones, Sweet, Mott The Hoople, The Monkees, The Kinks, and other acts. It’s available from the Silverback Publishing website.

The Court Theatre’s production of Oedipus Rex continues its run through December 8.

Bobby Elliott, who started drumming for The Hollies back in the early 1960s and still performs with them, has an autobiography titled It Ain’t Heavy It’s My Story – My Life And The Hollies’ coming out via Omnibus Press on April 2, 2020.

The Simon & Garfunkel Story continues its run through December 8 at the Broadway Playhouse. The show combines film and photos with a live band to present the folk rock duo’s rise to becoming one of America’s most popular acts. Broadway Playhouse is located at 175 E. Chestnut Street, at Water Tower Place.

Reason number 4,786 why I want to visit England again: The Camden area of London now has a Music Walk Of Fame inspired by the Hollywood Walk Of Fame in the USA. This one will be devoted entirely to music; highlighting acts that either emerged from Camden or staged a performance there at an early point in their careers. Pete Townshend and Roger Daltry of The Who unveiled the first commemorative stone, which honors their band’s accomplishments. According to NME online, Amy Winehouse and Madness will be next in line for The Music Walk Of Fame.

I just received my copy of Julianna Hatfield’s tribute album to The Police, and it’s every bit as fun as I hoped it would be. She takes a raw approach on her versions, and apart from getting tangled up in “Roxanne,” she consistently succeeds. In addition to the autographed CD, sticker, and button, there was a postcard advertising an upcoming covers album by Tanya Donelly and The Parkington Sisters. Like Hatfield’s effort, it will be available from American Laundromat Records in signed copies, colored vinyl, and special bundles. Donelly and the Parkington sisters will cover songs by The Go-Go’s, Wings, Split Enz, Echo and The Bunnymen, The Pretenders, and other notable acts. The album will be available for pre-order starting in January.

Steve Dawson and Diane Christiansen, who front the alt rock/country band Dolly Varden and have numerous solo projects, are scheduled for a gig the Hey Nonny venue in Arlington Heights on January 17. Singer-guitarist Chris Rawlins Cialdella will be their special guest.

The entertainment world has lost two iconic photographers in the past week; first with Robert Freeman (see last Friday’s Slumgullion) and the more recent passing of Terry O’Neill. Like Freeman, O’Neill may be best remembered for a Beatles pic, this one taken outside the EMI Studios on Abbey Road for The Daily Sketch newspaper. As related by obituary writer Harrison Smith in the Washington Post, O’Neill’s editor then asked him to photograph some of The Beatles’ contemporaries. When O’Neill came back with a photo of The Rolling Stones, the editor thought they looked like “prehistoric monsters” so a photo of The Dave Clark Five was added to show rock and roll had a nice side as well as a rough one.

SHE (Sisters Helping Elevate The Arts) is presenting The Holidays, a new play written and directed by Katrina V. Miller, from December 8 through December 22 at The Frontier on Chicago’s north side. Miller’s goal is to help bring awareness to help end Alzheimer’s disease, and a portion of the opening night performance will benefit Alz.org. The Frontier is located at 1106 W. Thorndale Avenue, tickets are available via the SHE website.
Posted by Terry Flamm at 8:51 PM