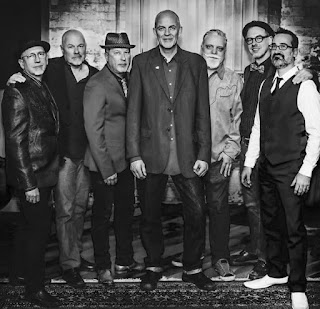 The tall guy in the middle is celebrating his birthday.

Chicago-based singer-guitarist Dag Juhlin is celebrating his birthday a day early by performing tonight with EXPO ’76—one of the several hundred bands he’s a member of—at Simon’s Tavern on Clark Street. EXPO ’76 features Juhlin and other veterans of the Chicago music scene playing an amazingly eclectic and always fun selection of cover versions. Admission for tonight’s show is free. Happy Birthday, Dag.

Over 125 artists, along with several small independent presses, will be showcasing their work when the third edition of the Chicago Art Book Fair takes place this weekend at the Chicago Athletic Association at 12 S. Michigan Avenue. The networking event is open to the public free of charge.

The Brian Setzer Orchestra’s annual holiday tour has been canceled due to lead vocalist-guitarist Setzer having tinnitus. That wipes out the gig scheduled for this Saturday night at the Chicago Theatre, but at least fans can listen the Orchestra’s Christmas albums, which offer original and standard holiday tunes souped-up with catchy, old-time rock and roll arrangements.

Over the years, my wife Pam and I have seen a lot of talented Irish acts perform at the Irish American Heritage Center on Chicago’s north side. The live entertainment takes a different turn this Saturday night at the Center with the Heritage Rockfest. The lineup includes the AC/DC tribute band TNT Chicago, punk/heavy metal outfit Pipe, the high-energy rock of Vicious Circle, and the blues/hard rock band Midnight Road. Admission is $10; the music starts at 7:00 p.m.

The 22nd Annual Jeff Buckley Tribute event will take place at Uncommon Ground’s Edgewater location at 1401 W. Devon Avenue in Chicago on November 17 and 18.
Posted by Terry Flamm at 8:37 PM