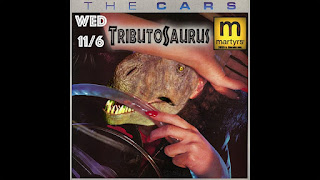 We lost Ric Ocasek a while back but his presence will surely be felt tomorrow night at Martyrs’ on Lincoln Avenue. That’s when Tributosaurus, one of the city’s best known tribute bands, will become The Cars. It’s hard to imagine new wave catching on as well as it did back in the 1970s without the nocturnal ambience of Cars songs such as “Just What I Needed,” “Bye Bye Love,” and “Moving In Stereo.” The band was justifiably inducted into The Rock And Roll Hall Of Fame last year.

Americana singer-guitarist Margo Price has been added to the musicians performing on The Last Waltz Tour, a tribute to The Band’s 1976 farewell concert at the Winterland Ballroom in San Francisco. The Last Waltz Tour, with headliners Warren Haynes, Jamey Johnson, Lukas Nelson, John Medeski, and Don Was, comes to the Chicago Theatre on November 21.

A feature-length documentary about Ronnie Wood titled Somebody Up There Likes Me is set to open in theaters around Ireland and the U.K. on November 26. It will include vintage footage of his days with The Jeff Beck Group, The Faces, and The Rolling Stones. Hopefully, it will open in the States some time in the near future.
Posted by Terry Flamm at 9:39 PM