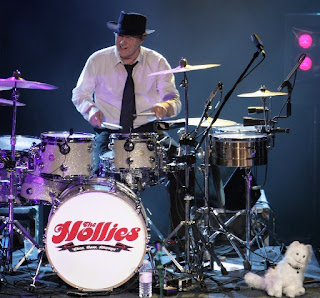 I haven’t made it to Stay Tuned: Rock On TV at the Museum Of Broadcast Communications yet, but I definitely will. The exhibition originated at the Rock And Roll Hall Of Fame, so the memorabilia is impressive. I’ve been informed by a friend that Stay Tuned includes a drumhead that once belonged to Bobby Elliott of The Hollies. He gave it to Shindig after The Hollies performed on the TV show in 1965. I corresponded with Mr. Elliott via email back in 2010 for a piece I was doing for the Illinois Entertainer about The Hollies being inducted into the Rock and Roll Hall Of Fame. He still performs with the band, and was extremely gracious.

The first date on Juliana Hatfield’s 2020 tour will be at SPACE in Evanston on January 16. Other cities she’ll be visiting include Nashville, Indianapolis, Austin, Los Angeles, and Portland.

Indie rock band The Rut (which includes avid Hatfield fan singer-guitarist Frank Carr) will be performing tomorrow night at Phyllis’ Musical Inn as part of the venue’s American Troubadour Night. The band has its roots in the Famous In The Future comedy group, which performed every year at the Mary-Arrchie Theatre’s annual Abbie Fest, and are now runs the annual YippieFest held in August.

The Social Act, the Ellis Clark-fronted band that got off to an impressive start back in the late 1980s with atmospheric rock songs like “World War Three” and “Reverend Joe,” has returned to the recording studio and local club scene. Their Not Too Late album is now available, and they’ll be at Montrose Saloon this Friday night. Icebox and Steve Karras are also on the bill. Show time is 9:00 p.m.

Go Time! and The Spindles, two Chicago area power pop bands that have earned praise here on Broken Hearted Toy for their albums and live performances, will share a triple bill with 45 Souls on the following night at Montrose Saloon.

And finally, as a reminder, there are still a few Halloween treats left in the bowl for some more scary fun.

Late Bar, at 3534 W. Belmont on Chicago’s north side, is having a Halloween Music Video Monster Mash Up featuring DJs Sonic Marchesa and Samorama this Thursday night. Late Bar promises lots of candy and a My Life With The Thrill Kill Kult ticket giveaway.

The Pickwick Theatre in Park Ridge will offer a twin bill of the 1931 horror films Frankenstein and Dracula tomorrow night, as part of its Classic Film Series. Boris Karloff and Bela Lugosi are the stars, respectively. Admission is $12.

The Music Box will be screening The Rocky Horror Picture Show at 10:00 p.m. tomorrow night and Halloween. Audience members are encouraged to participate.

There will be a Waking The Witch benefit for the Clinic Vest Project at The Empty Bottle tomorrow night, featuring DJ Claire Lyerla and DJ Ruby Des Jardins.


The Chicago Philharmonic will provide a live soundtrack when Tim Burton’s The Nightmare Before Christmas is screened at the Auditorium Theatre on Halloween and November 1.
Posted by Terry Flamm at 9:33 PM