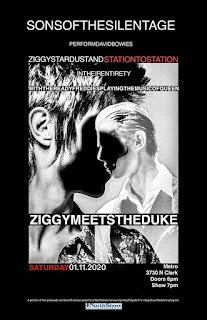 Sons Of The Silent Age, the David Bowie tribute band made up of Chicago club scene veterans, has a gig coming up on January 11 at Metro. Local Bowie fanatics might remember this group performing in Daley Plaza to help kick off the David Bowie Is exhibition at the Museum Of Contemporary Art Chicago, or opening for Billy Idol at Taste Of Chicago. For their Metro gig in January, Sons Of The Silent Age are performing a Ziggy Meets The Duke show in which they’ll perform the entire Ziggy Stardust and Station To Station albums. The Ready Freddies, a seven-person (six women and John San Juan from Hushdrops) Queen tribute band will be the opening act. A portion of the proceeds will go to benefit cancer patients at the NorthShore University HealthSystem’s Integrative Medicine Program.

If you’re looking for the perfect gift for that Kurt Cobain or Janis Joplin fan on your holiday list, Julien’s Auctions is holding an Icons and Idols: Rock and Roll auction at the Hard Rock Cafe in New York this Friday and Saturday. Self-described as “The experts in contemporary and pop culture,” Julien’s Auctions will be taking bids on Cobain’s custom-made left-handed Fender Mustang guitar; a charcoal and ink self-portrait by David Bowie; Mick Jagger’s handwritten setlist for a 1965 Rolling Stones concert; and “a rare archive of Big Brother and The Holding Company that has not been opened in over fifty years.” Other artist memorabilia on sale includes Elvis Presley; Sid Vicious; Eric Clapton; The Beatles; and Queen.

Chicago-based indie rock band The Handcuffs are looking to release their latest album in vinyl and digital formats in early 2020. There may also be a limited release on CD. It will be their fourth effort, and don’t be surprised if some of the songs wind up being used on TV shows. The Handcuffs have a good track record of doing that kind of thing. They’re be part of a potent double bill with Sunshine Boys at Reggie’s on State Street on December 14. Both bands will likely be offering a preview of their new albums.