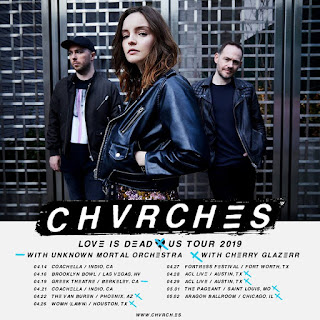 Tickets are now on sale for Chvrches and Cherry Glazerr at Aragon Ballroom on May 2; Mekons at The Hideout on July 14; Portland Cello Project at SPACE in Evanston; Jessica Pratt at Sleeping Village (that’s a venue on Belmont, not a town) on May 10; Wild Belle at Metro on April 21; and for Strange 90s: A Benefit for Jerry Bryant of JBTV with Naked Raygun, Andrew W.K., Local H and other acts at Metro on March 8.

For a more extensive list of upcoming concerts, check out page 40 in this week’s issue of The Reader. This is also the edition that thanks all the people who donated money to help the long-time Chicago free paper stay afloat. According to publisher Tracy Baim, 2,400 people and businesses pitched in, including one donor who gave $4,800. You can find my name among the donors on 24. Long live The Reader.

Congratulations to Graham Nash on receiving a Lifetime Achievement Award at the UK Americana Awards this past Thursday at Hackney Empire in London. He’ll be coming to Chicago for show at The Athenaeum Theatre on March 17. The event is a benefit for the Old Town School Of Folk Music’s music education programs.

The Specials released a new album titled Encore yesterday. “It’s a celebration of what The Specials is, and what it’s about,” founding member Terry Hall explains on the band’s Facebook page. “That’s why I still do it.” The band’s 40th Anniversary Tour brings them to Chicago for a show at The Vic on June 8.

Other albums due out this month include Sunshine Rock by Bob Mould and Varshons 2 by The Lemonheads on February 8; and Ladytron by Ladytron, Band Signs by Tedeschi Trucks, and Psychedelic Country Soul by The Long Ryders on February 15.

Durty Nellie’s in Palatine is temporarily closed due to a fire at the music venue last Friday. I didn’t see a mention of this on their Facebook page, but the official website promises to let everyone know when they’ll reopen. The message also thanks, “all of the first responders who worked so hard, and in such extreme temperatures, to put the fire out as quickly as they could.” Here’s hoping Durty Nellie’s will be back and rocking in the near future.

Rock documentary updates. Boy Howdy: The Story Of Creem Magazine will have its premiere at this year’s SXSW Festival in Austin. Things are moving along for The Power Pop Movie, according to a recent Facebook post from Justin Fielding stating there’s extensive editing to do but he’s “very much on track for release at the end of this year.” Director Peter Jackson of Lord Of The Rings fame is now on a quest to transform 55 hours of previously unseen footage of The Beatles into a proper documentary about the recording sessions that preceded the 1970 film Let It Be. Maybe he’ll make it a trilogy.

Chicago alt rock band whitewolfsonicprincess has a record release party coming up at Jarvis Square Pottery next Saturday, February 9 at 7:30 p.m. for its tuneful and beguiling third album The Alternate Boot. The store is located at 1443 W. Jarvis on Chicago’s north side.

Fatima Ali, one of the contestants from the 2018 season of Top Chef has passed away from cancer. Her skills, determination, and engaging personality made her a fan favorite, and she continued to show those qualities while sharing her battle with the disease on social media. My nephew Joe Flamm and all the contestants from that season of Top Chef supported Fatima throughout her struggle, and have expressed their sorrow and offered condolences to her family.