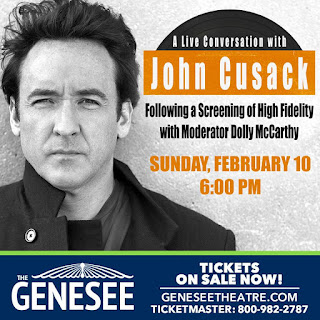 John Cusack will be at the Genesee Theatre in Waukegan this Sunday night for a conversation with moderator Dolly McCarthy after a screening of High Fidelity. The movie starts at 6:00 p.m. There was an interesting article by Jessi Roti in yesterday’s Chicago Tribune in which Cusack talks about the making of the film and his mixed feelings about the upcoming TV version starring Zoe Kravitz.

Tickets went on sale today for Captain Beyond at Reggie’s Music Joint on April 12; Dollyrots at Reggie’s Music Joint on March 14; Florence + The Machine with Blood Orange at Huntington Bank Pavilion on May 23; Lemonheads and former Replacements bassist Tommy Stinson at Thalia Hall on May 7; Specials at The Vic on June 8; and Vampire Weekend at Huntington Bank Pavilion on June 16.

Rendezvous In Chicago, director Michael Glover Smith’s third feature film, kicks off a four-day run tonight at the Gene Siskel Film Center. Smith will be on hand for an audience discussion at tonight's screening, as well as the ones on Saturday afternoon, Monday evening, and Wednesday evening.

Chicago alt rock band whitewolfsonicprincess will perform with a different lineup for each of its two sets at the record release party for its new album The Alternate Boot Vols. 1 and 2 at Jarvis Square Pottery tomorrow night. There will also be acoustic sets by Will Phalen and Kacie Swierk; and musician/actor/film critic Pat McDonald will serve as Master Of Ceremony. The music starts at 8:00 p.m., the Jarvis Square Pottery store is located at 1443 W. Jarvis.

The Chicago European Union Film Festival begins on March 8 and runs through April 4 at the Gene Siskel Film Center.

If you’re planning on meeting up with David Tennant at C2E2 (Chicago Comic Entertainment Expo) next month, be on your best behavior or he might talk about you on one of his podcasts. The Doctor Who, Broadchurch, Jessica Jones actor has already recorded a couple episodes of David Tennant With…, and they’re available on cashbox. His first two guests were Whoppi Goldberg and Olivia Coleman. Kristin Ritter, Jon Hamm, and Jodie Whitaker, and Ian McKellen are slated for future episodes. C2E2 runs at McCormick Place March 22 –24, and the guests also include Doctor Who alums Matt Smith and John Barrowman.

The critically acclaimed Chicago-based power pop band Frisbie will join Mike and Eric from The Bon Mots for a double bill next Sunday, February 17 at Montrose Saloon.

The Impostors Theatre Company will present Caged - An Allegory at the Pentagon Theater starting next Friday, February 15 at Collaboration Studio. Written and directed by Stefan Roseen, the play mixes comedy and horror while exploring questions of identity and the ethics of art.

There was a pleasant surprise for Graham Nash at the UK Americana Awards in London last Thursday when the person presenting his Lifetime Achievement Award turned out to be Allan Clarke. Nash and Clarke first began singing together as schoolboys and went on to form The Hollies. It’s likely their reunion last week involved some additional celebrating since Nash’s birthday was just two days later.

The Corky Siegel Chamber Blues with Lynne Jovdah takes place on March 31 at the Metropolis Performing Arts Centre in Arlington Heights. Siegel performed blues and folk influenced rock with The Siegel-Schwall Band in the 1960s and 70s, and the band joined forces with conductor Seiji Ozawa and the San Francisco Symphony Orchestra for some amazing blues/classical mashups.

I had been wondering why Phil Angotti, a veteran of Chicago’s power pop scene, wasn’t part of the lineup again for this year’s George Harrison Tribute at Martyrs’ on February 23. But then I remembered that’s the day he’s sharing a bill with the original lineup of Off Broadway at Reggie’s Rock Club. The Evictions are also scheduled for Reggie’s Rock Club on February 23.

The Palatine Patch website is reporting that the Durty Nellie’s music venue in Palatine is moving quickly toward reopening after a fire caused extensive damage a few weeks back.

Mark your calendar with paisley colors: YippieFest, a three-day celebration of theatre, comedy, and music returns for its third year on the weekend of August 16 – 18. The festival carries on the tradition of Abbie Hoffman Died For Our Sins, which was an annual event at Mary-Arrchie Theatre for over 25 years. Abbie Fest vets Famous In The Future are the driving force behind YippieFest and they’ll be looking for participants soon.
Posted by Terry Flamm at 10:28 PM