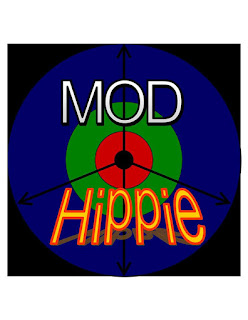 Mod Hippie’s latest album Wannabe Nobody is similar to Sonic Assault, the Jonny Weathers With Paul Cook EP that also came out last year. Cook was the drummer for The Sex Pistols, and Mod Hippie’s lineup includes D.J. Bonebrake, who still drums for X. Both releases create a gritty, off-the-beaten-path ambience via sparse arrangements and intriguing lyrics.

The epic “Saturday Show” on Wannabe Nobody compares a veteran band on tour to a weekly cartoon that’s lost its audience. “The older kids no longer want to hear,” vocalist and chief songwriter Doug McGuire explains over a driving beat. The power behind behind the glam rock fun of “And Everyone The Fashion (So Sorry)” comes from Jason Berk, Mike Schnee, David Marks, and Adam Marsland all playing electric guitars, and Berk’s slide guitar adds a country and western feel to the down-and-out ballad “You Know.”

It’s hard to tell if “Lux” is paying tribute to Cramps singer Lux Interior or mocking him, but either way, the twangy guitar arrangement is a blast. It follows directly after a catchy rendition of Paul Westerberg’s satirical “Johnny’s Gonna Die” that features McGuire and backing vocalist Teresa Cowles. Bonebrake sets the pace for the garage and psychedelic rock of “We Leave It All Behind” and the Schnee-penned “Cricket LaRue” mixes T-Rex with silly lines like, “After party, zing zang, everything, the whole shebang.” Shebang, indeed.
Posted by Terry Flamm at 9:29 PM