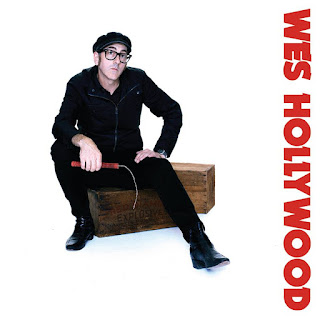 When Wes Hollywood recorded Fantasy Arcade back in 2012, it landed in the number three spot on my Broken Hearted Toy Favorite Releases for that year. Dynamite (available from Kool Kat Musik) came out in November 2018, and it feels like he’s never been away. Hollywood still likes to approach an irresistible melody with a bag of lyrical tricks like quick rhymes, putdowns, and witty observations. And along with Tom Shover, Peter Javier, and Spencer Matern, he continues to specialize in energetic power pop.

That said, Wes Hollywood draws from music that arrived at least a decade after the mid-1960s pop and Brit Invasion hits that inspire a lot of his peers. Songs like “Evelyn” and “Dirty Manhattan” evoke Elvis Costello in terms of instrumental style and biting sentiments. “I’ll Take You Back,” a funny tale of a guy who’s unaware of the legitimate reasons his girlfriend dumped him, calls to mind The Cars.

A lot of these tracks deal with crumbling relationships, but there’s also the aggressive “Get It Right,” which finds Hollywood vowing to save the world. “Small Talk,” a slap at an incessant chatterbox, would make a great companion for The Elvis Brothers’ rollicking “Motormouth.” “When Sunday Rolls Around” is another song about a girlfriend departing, but here Hollywood swaps humor for genuine emotions and a soulful arrangement.
Posted by Terry Flamm at 8:49 PM