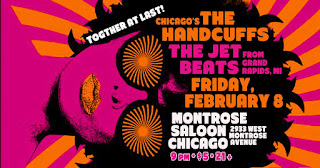 Looks like there’ll be a lot of fun, catchy sounds this Friday night at Montrose Saloon. The Chicago-based indie rock band The Handcuffs will share a double bill with The JetBeats from Grand Rapids. Led by lead vocalist-guitarist Chloe F. Orwell and drummer Brad Elvis, The Handcuffs have released three albums (all favorably reviewed on Broken Hearted Toy) and are finishing up their next effort in the studio. The JetBeats take a fun, early Beatles approach on the two EPs they’ve released, with an emphasis on guitars and harmonicas.

Chicago Theatre Week kicks off tomorrow and will run through Sunday, February 17 at various theaters around the Chicago area. Discount tickets of $15 or $30 will available for 120 participating shows, including Glass Basement by iO Theater; Defiance by Buffalo Theatre Ensemble; How To Catch Creation at the Goodman Theatre; Dead Man’s Cell Phone by The Comrades; Small Jokes About Monsters by 16th Street Theater; Arms And The Man by Shaw Chicago Theater Company; and One Clover Road by American Blues Theatre. Check the Chicago Theatre Week website for more details.

The Chicago European Union Film Festival begins on March 8 and runs through April 4 at the Gene Siskel Film Center.
Posted by Terry Flamm at 9:45 PM