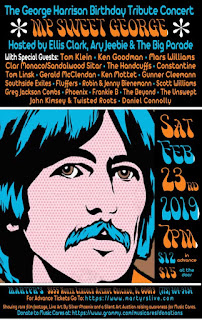 I’ve already purchased a ticket to the George Harrison Birthday Tribute Concert coming up on February 23 at Martyrs’ to make sure I don’t miss this annual event. Local musicians often warn fans to buy tickets to a show because it might sell out, but in this case, it’s not hype. Ellis Clark, a founding member of Epicycle and Social Act, will once again serve as host, along with Ary Jeebie, lead vocalist from the garage/rockabilly band Amazing Heeby Jeebies.

Other scheduled performers include Ken Mottet; Clar Monaco/Sandalwood Sitar; Constantine; Greg Jackson Combs; Phoenix; Frankie B; The Unswept; Gerald McClendan; Robin and Jenny Bieneman; The Handcuffs, The Unswept; Gunner Cleemann; Tom Linsk; Southside Exiles; The Fluffers; The Beyond; and Scott Williams. In previous years, the performances have been first rate, and there’s a genuine atmosphere of peace and harmony that George himself would (does?) love. Martyrs’ is located at 3855 N. Lincoln Avenue.

The Our Music Institute (OMI) is having an opening reception tomorrow night from 6:30 to 8:30 at 400 Central Avenue in Northfield. The new school and live music agency was formed by Michael Poupko, a director and teacher at the North Shore Music Institute, and will serve Winnetka, Northfield, Glenview, Kenilworth, Willamette, Glencoe, and Highland Park. OMI’s motto is “Our Community, Our Music, Our Education.”

Rendezvous In Chicago, director Michael Glover Smith’s third feature film, kicks off a four-day run at the Gene Siskel Film Center next Friday. Smith will be on hand for an audience discussion at that screening, as well as the ones on Saturday afternoon, Monday evening, and Wednesday evening. Rendezvous In Chicago, which features Clare Cooney, Matthew Sherbach, Nina Ganet, and Rashaad Hall, was the Audience Choice Winner at the Adirondack Film Festival, and was the Best Comedy Winner at the Strasburg Film Festival.

The Wire venue in Berwyn will bring together five strangely named bands with different approaches to off-kilter rock tomorrow night with Deepspacepilots; Discoveries of the American Scientific; Umbra and The Vulcan Siege; Dead Freddie; and The Thin Cherries. The doors to this adventure open at 9:00 p.m.

Ken Stringfellow has a solo show coming up in Chicago next Thursday, February 7 at Gunhed Studios. He’ll be performing songs and spinning tales about being a founding member of The Posies, performing with R.E.M. and Big Star, and other elements of his extensive musical career. Gunhed Studios is located at 2941 W. Belmont; tickets range from $25 to $100.
Posted by Terry Flamm at 9:24 PM