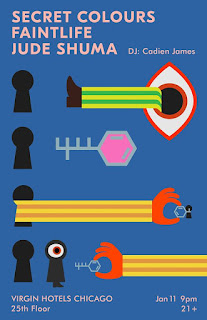 Minds will be blown in downtown Chicago tonight as the psychedelic quartet Secret Colours rock the 25th floor of the Virgin Hotel at 203 N. Wabash. Two other psych-minded local acts—the trio Faintlife and singer-guitarist Jude Shuma will also be on the bill, along with DJ Cadien James. This is exactly the kind of thing I was hoping for when I heard a while back that the Virgin Hotel would be booking live music.

The Beauty Bar at 1444 W. Chicago Avenue is the place tonight for Electric Feel: An Indie Rock Dance Party being sponsored by JBTV Music Television. You can expect to hear records by MGMT, Franz Ferdinand, LCD Soundsystem, Phoenix, Matt and Kim, The Yeah Yeah Yeahs, and several acts starting at 9:00 p.m. There’s no cover up to 10:00 p.m.

The always impressive and entertaining David Bowie tribute act Sons Of The Silent Age will be joined by special guest, acclaimed actor Michael Shannon when it performs Bowie’s Scary Monsters (and Supercreeps) tomorrow night at Metro. A portion of the proceeds will benefit cancer patients at NorthShore University HealthSystems’s Integrative Medicine Program.

The Reader is asking for donations to help keep the long-running Chicago free weekly running. The amount can be as little as $1, but anyone who chips in $48 (to match the number of years The Reader has been around) will become a Founding Member with perks to be named later. All donors, regardless of the amount, will have their names listed in an upcoming issue. I’ve picked up a copy of The Reader every week for most of those 48 years and would be sad to see it go. So, I’ve just made a $48 donation.

This Sunday, January 13, is when rockabilly/garage rock band The Amazing Heeby Jeebies kick off a year-long residency at Montrose Saloon. They’ll be performing every second Sunday, and according to the band’s Facebook page, there will be special guests and lots of surprises.

The eccentric and beloved British musician Robyn Hitchcock is coming to the Prairie Center For The Arts in Schaumburg on January 19. Hitchcock has an extensive catalog of songs to choose from, dating back to his days with Soft Boys in the mid-1970s. Showtime is 7:30 p.m.

The Zombies have a special concert coming up on January 20 at The Alban Arena in St. Albans to honor the late Jim Rodford, who played bass guitar for them, Argent, and The Kinks. Founding members Colin Blunstone and Rod Argent will celebrate the band’s induction into the Rock And Roll Hall Of Fame with an acoustic show at Canary Wharf in London. In other Zombies news, Blunstone, Argent, Chris White and Hugh Grundy will drop by the Waterstones store in St. Albans to sign copies of the book The Odessey: The Zombies in Words And Images. Congratulations to Graham Nash on being named as the recipient of the Lifetime Achievement Award at this year’s UK Americana Awards. The ceremony takes place at Hackney Empire in London on January 31. Tickets are available if you live in England or fancy flying over there.

The success of former Doctor Who cast members continues as David Tennant, Billie Piper, Matt Smith, Peter Capaldi, Karen Gillan, Jenna Coleman, and John Barrowman continue to land roles in movies and on TV. Gillan, who wrote, directed, and starred in the new indie film The Party’s Just Beginning, has been added to the cast of the upcoming movie Gunpowder Milkshake, according to The Hollywood Reporter. It’s said to feature an all-woman cast in a tale about assassins. By the way, Tennant is quite unnerving as John Knox in Mary, Queen Of Scots.

Great Moments In Vinyl, a group of local musicians who frequently stage tribute concerts to specific album around the Chicago area, will present The Beatles With Strings at City Winery Chicago on January 20.

Tributosaurus continues its Signature Series at the Copernicus Center on Chicago’s northwest side on January 20 with One Hit Wonders of The 80s.

The Pegasus Theatre’s 32nd Young Playwrights Festival continues its run at Chicago Dramatists at 773 N. Aberdeen on weekends through January 27.
Posted by Terry Flamm at 10:04 PM