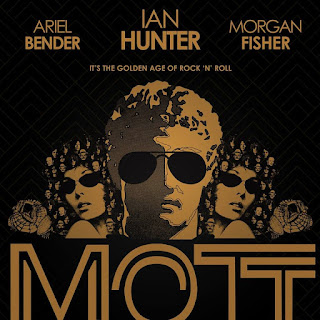 All the way from hiatus. Tickets went on sale today for the Mott The Hoople ’74 concert featuring Ian Hunter, Morgan Fisher, and Ariel Bender at Chicago Theatre on April 3. The tour will mark the 45th anniversary of band’s The Hoople and Live albums, and will start in England.

The Imperial Sound, a Chicago-based sextet that mixed jazz, blues, rock, and a dash of vintage supper club ambience on its very fun debut effort The New AM, has a gig tomorrow night at Hey Nonny in Arlington Heights on January 26. A perfect choice for northwest suburbanites hesitant to drive into Chicago on such a cold wintry night. Plus, we should encourage this new venue to bring more Chicago-area acts out our way.

The Bangles will be part of the 80s Weekend #7 event taking place tomorrow night at the Microsoft Theater in Los Angeles. OMD, The Flirts, Jody Watley, and Banarama are also among the acts who’ll be performing.

Chicago Filmmakers will present Telesonic 9000 with live music by Dominick Gray tomorrow night. Gray will be performing on synchronized drums as found footage is shown on the screen. Chicago Filmmakers is located at 5720 N. Ridge Avenue in Chicago.

Congratulations to UK indie vinyl-only label Fruits de Mer on its 10th anniversary of bringing authentic garage, psychedelic and prog rock to the universe. I’ve reviewed a number of their releases over the past few years, based on the promo CDs they send out to rock critics and publications.

Music Box Theatre on Southport will present Deconstructing The Beatles: The Birth Of The Beatles on Tuesday, January 29 at 7:00 p.m. Composer/producer and Beatles historian Scott Freiman will discuss the iconic band’s earliest days and their experiences in Hamburg.

Vocalist Colin Blunstone of The Zombies’ kicks off an East Coast tour of the U.S. in Pawling, NY next Thursday, January 31. Other stops on the tour include Philadelphia; Portland, MN; Boston; Washington, D.C.; and New York.

The Our Music Institute (OMI) is having an opening reception on February 1 at 400 Central Avenue in Northfield. The new school and live music agency was formed by Michael Poupko, a director and teacher at the North Shore Music Institute, and will serve Winnetka, Northfield, Glenview, Kenilworth, Willamette, Glencoe, and Highland Park. OMI’s motto is “Our Community, Our Music, Our Education.”

If you missed Robyn Hitchcock’s recent gig at the Prairie Center For The Arts in Schaumburg, you’ll have another opportunity to catch the eccentric British rocker on April 3 at SPACE in Evanston.

Other tickets that went on sale today include Alice Merton at Bottom Lounge on April 26; Santana and The Doobie Brothers at Hollywood Casino on August 4; and Jeff Tweedy at The Vic on March 22. This Sunday night at 10:00 p.m., WXRT will air a Jeff Tweedy concert it recorded while back, along with an interview withTweedy conducted by the station’s air personality Marty Lennartz.

Graham Nash will pick up a Lifetime Achievement Award at this year’s UK Americana Awards ceremony when it takes place next Thursday at Hackney Empire in London.
Posted by Terry Flamm at 10:39 PM