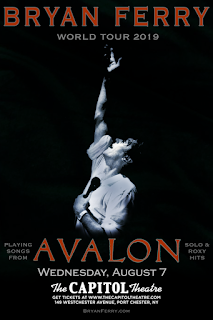 He’ll be playing “Oh Yeah” at the Chicago Theatre. Ultra suave solo artist and founding member of Roxy Music Bryan Ferry comes to town for a gig on August 1. Tickets are now on sale.

Robyn Hitchcock will bring his eccentric and impossibly melodic tunes to the Prairie Center For The Arts in Schaumburg tomorrow night. He has an extensive catalog of songs to choose from, dating back to his days with Soft Boys in the mid-1970s. Showtime is 7:30 p.m.

The Zombies will pay tribute to the late Jim Rodford, who played bass guitar for them, Argent, and The Kinks, with a concert this Sunday at The Alban Arena in St. Albans in the U.K.

The Zombies’ lead vocalist Colin Blunstone kicks off his East Coast tour on January 31 with a gig in Pawling, NY. Other stops include Philadelphia; Portland, MN; Boston; Washington, D.C.; and New York.

Great Moments In Vinyl, a group of local musicians who frequently stage tribute concerts to specific album around the Chicago area, will present The Beatles With Strings at City Winery Chicago this Sunday night.

They combined forces in The Day Of The Doctor 50th Anniversary episode and now they’ll be bringing their sonic screwdrivers to the South Building at McCormick Place in Chicago. Matt Smith and David Tennant of Doctor Who will be guests at this year’s C2E2 (Chicago Comic and Entertainment Expo) when it runs March 22–24. John Barrowman, from Doctor Who, Torchwood, and Green Arrow, will among the stars scheduled to appear.

Matt Smith fans will get a chance to see him as they never have before when Mapplethorpe opens its first Chicago run at the Gene Siskel Film Center from March 1 through 7. Smith plays the title role in this fictionalized biography of the photographer.

Tributosaurus continues its Signature Series at the Copernicus Center on Chicago’s northwest side this Sunday with a One Hit Wonders of The 80s concert.

It’s a jumpin’ little record I want my jockey to play. The people at Record Store Day recently unveiled their RSD3 mini-turntable at the Consumer Electronics Show in Las Vegas. It will available as part of this year’s Record Store Day (April 13), along with a selection of three-inch records. RSD promises more details in the coming months.

Big Brother’s Vinyl, an local guitar-driven band that cover classic rock hits as well some unexpected deep cuts and rarities, will perform at Mac’s On Slade in Palatine on Sunday, January 20. The show starts at 5:00 p.m.

The Pegasus Theatre’s 32nd Young Playwrights Festival continues its run at Chicago Dramatists at 773 N. Aberdeen on weekends through January 27.

Montrose Saloon on Chicago’s north side has announced it will host a Smithereens Night on May 3, with The Dry Look, Phil Angotti, and Love Punch paying tribute to the New Jersey power pop champions.

Ken Stringfellow has a solo show coming up in Chicago on February 7 at Gunhed Studios. He’ll be performing songs and spinning tales about being a founding member of The Posies, performing with R.E.M. and Big Star, and other elements of his extensive musical career. Gunhed Studios is located at 2941 W. Belmont; tickets range from $25 to $100. In related news, The Posies are set to begin work on a new album soon.
Posted by Terry Flamm at 9:53 PM