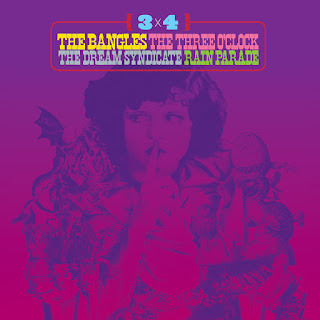 The 3X4 album does a great job of bringing listeners back to the collaborative spirit and catchy songs of the Paisley Underground in the early 1980s. One of this past Black Friday Record Store Day’s limited editions but slated for an official release at some point in 2019, 3X4 brings together four major players from that Los Angeles scene and features them recording each other’s vintage songs. The Bangles are the best known of the acts involved, but don’t expect anything resembling “Eternal Flame.”

This is The Bangles as their true fans know them; a band that created original 1960s style pop and garage rock that they performed in clubs with The Three O’Clock, The Dream Syndicate, and Rain Parade. All four of these groups are in top form and sound like they’re having a blast on 3X4, as well they should. This is music they’ve known and loved for decades.

The Dream Syndicate’s Steve Wynn states in the extensive liner notes that he wanted his band’s new version of The Salvation Army (a precursor of The Three O’Clock) song “She Turns To Flowers” to reignite the original’s “beautiful chaos.” The Bangles’ exotic take on Rain Parade’s “Talking In My Sleep” features tabla playing from guest musician Meena Makhijani, and The Three O’Clock captures the lilting arrangement of The Dream Syndicate’s psychedelic “What She’s Done To Your Mind.”

Rain Parade slows the tempo a bit on The Bangles’ romantic “The Real World,” giving it a delicate beauty as well as ringing guitars. But the best example of how well 3X4 works comes on The Dream Syndicate’s guitar-fueled take on The Bangles’ first hit “Hero Takes A Fall” featuring Linda Pitmon and Bangle Vicki Peterson supporting Steve Wynn on backing vocals. Here’s hoping we’ll hear more collaborations from these four bands and even a tour.
Posted by Terry Flamm at 9:50 PM