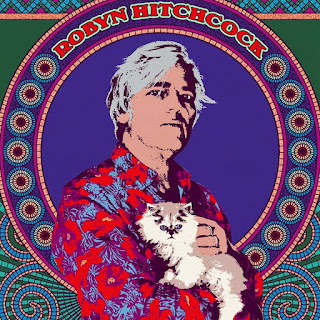 The eccentric and beloved British musician Robyn Hitchcock is coming to the Prairie Center For The Arts in Schaumburg on January 19. Hitchcock has an extensive catalog of songs to choose from, dating back to his days with Soft Boys in the mid-1970s. Showtime is 7:30 p.m.

The very impressive David Bowie tribute act Sons Of The Silent Age will be joined by special guest, acclaimed actor Michael Shannon when it performs Bowie’s Scary Monsters (and Supercreeps) next Saturday, January 12 at Metro. A portion of the proceeds will benefit cancer patients at NorthShore University HealthSystems’s Integrative Medicine Program.

The city of Chicago has designated 2019 as a year to celebrate the history, talent, and diversity its theatre community. An official press release promises a “first-of-its-kind in the U.S.” series of events created through the joint effort of Mayor Rahm Emanuel, Department Of Cultural Affairs and Special Events (DCASE), and League Of Chicago Theatres. Festivities are planned at locations like Millennium Park, the Cultural Center, and neighborhood parks, as well as via pop-ups at trade shows.

The Zombies have a special concert coming up to honor the late Jim Rodford, who played bass guitar for them, Argent, and The Kinks. The event will be held on January 20 at The Alban Arena in St. Albans in the U.K.

Chicago alt rock band whitewolfsonicprincess has a record release party coming up at Jarvis Square Pottery on February 9 at 7:30 p.m. for its third album The Alternate Boot. The store is located at 1443 W. Jarvis on Chicago’s north side.

Next Sunday, January 13, is when rockabilly/garage rock band The Amazing Heeby Jeebies kicks off a year-long residency at Montrose Saloon. They’ll be performing every second Sunday, and according to the band’s Facebook page, there will be special guests and lots of surprises.

The longtime power pop oriented show Secret Weapon on Woody Radio has posted its Top Albums of 2018 list. Blue Music, the debut from Sunshine Boys, came in at number one, followed by Justine and The Unclean, Van Go, Yipes! and Palmyra Delran and The Doppel Gang. Other acts among the 30 honorees include Lannie Flowers, Kurt Baker Combo, The Pandoras, Willie Nile, and The Grip Weeds.

I was sad to see that Pegi Young, singer-songwriter and former wife of Neil Young, has passed away. She co-founded the Bridge School, a private school for children with physical disabilities. She and Neil organized annual charity concerts to help fund the school.

Great Moments In Vinyl, a group of local musicians who frequently stage tribute concerts to specific album around the Chicago area, will present The Beatles With Strings at City Winery Chicago on January 20.

The Imperial Sound has a gig coming up at Hey Nonny in Arlington Heights on January 26.

Matt Smith, of Doctor Who and The Crown fame, will be one of the guests when this year’s C2E2 (Chicago Comic and Entertainment Expo) runs March 22–24 at the South Building at McCormick Place.

Legendary vocalist Roger Daltry is offering some drinking-related collectibles to benefit the Teen Cancer America campaign on the Eminent Life website. A bottle of Charles Orban Cuvee champagne designed to look like the cover of The Who’s Tommy album is available.

My wife Pam and I thoroughly enjoyed our bus tour of Ireland last fall but would have preferred having more time to spend in Dublin. Even better, I would have loved to have been on the street corner where Bono and The Edge were busking recently. According to Rolling Stone and the WXRT website, the U2 boys were part of annual charity event to help homeless people in the city. Glen Hansard, Damien Rice, and Imelda May were also involved.
Posted by Terry Flamm at 10:16 PM