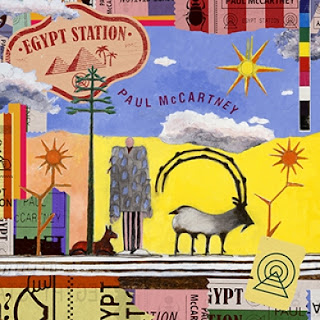 Egypt Station, Paul McCartney’s first album since New came out in 2013, once again finds the iconic musician eager to embark on more adventures. It has 16 tracks, and would have been stronger without a few of them. Still, even if some of the slower tunes are nondescript, there’s a lot to admire about the work Sir Paul keeps sending our way.

The piano arrangements and vocal phrasing on “Hand In Hand” and “Do It Now” call to mind the vintage material of Kisses On The Bottom, but these two newer efforts fall short of being standards. “I Don’t Know” and “Happy With You” also find McCartney in a pensive mood, but their arrangements are more inventive and engaging. On the other end of the spectrum, he sounds like he’s having a blast amidst the offbeat sound effects and middle eastern rhythms of “Caesar Rock.”

“Come On To Me” figured prominently in that viral Carpool Karaoke clip McCartney did with James Corden, and it also has a lineage to his Beatles songs and some of his better solo hits. The anti-bullying rallying cry of “Who Cares” grooves to a funky beat that should connect with the kids who most need to hear its empowering message. “Back In The Brazil” sets a romantic tale to some infectious jazz; coming across as South American take on “Oh Bla Di Oh Bla Da.” McCartney throws some political punches on “Despite Repeated Warnings” and the clever format and heartfelt lyrics of “People Want Peace” would make John Lennon proud.
Posted by Terry Flamm at 7:11 PM