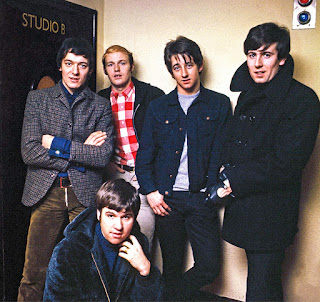 The Hollies back in the 1960s, with Eric Haydock crouching in front.

I’m sad to hear that bassist Eric Haydock, an original member of The Hollies, has passed away. Earlier today, the band posted the news on its official Facebook page and website. Haydock's rhythm section mate back in the 1960s and still current Hollies drummer Bobby Elliott composed a heartfelt tribute that praised Haydock’s expertise as a musician.

“In the early 1960s Eric was one of the finest bass players on the planet,” Elliott stated. “Although Eric left the Hollies in 1966, I occasionally listen enthralled by our BBC and Abbey Road recording sessions and dear Eric masterfully playing his six string bass.”

Haydock was playing that bass when the band first caught my attention with the effervescent hits “I Can’t Let Go” and “Bus Stop,” as well as on the Hear Here album I received as a Christmas present back in 1966. I’ve been an avid Hollies fan ever since. Haydock was sometimes described in fan magazines as the quiet or enigmatic member. He was replaced by Bernie Calvert in 1966.

I saw The Hollies perform live on three occasions, but not the lineup with Haydock. It would have been an essential part of their history to experience. When The Hollies were inducted into The Rock And Roll Hall Of Fame in 2010, Haydock was invited to attend the ceremony, and joined Graham Nash, Allan Clarke, Terry Sylvester, and Bernie Calvert onstage to receive their awards. (Bobby Elliott and Tony Hicks were performing with the current version of The Hollies in London.) So, a toast to Eric Haydock and the role he played in making The Hollies an international success.

Here’s a clip of Haydock playing bass with The Hollies on one of their earliest hits “I’m Alive.”
Posted by Terry Flamm at 9:44 PM