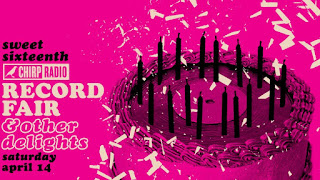 Mark your calendars. As in so many years in the past, April will be an adventurous month in the Chicago area. Its eclectic schedule involves annual events and live performances; music, film, theatre, fantasy, and collectibles. Here’s a quick look at what to expect.

Saturday Night Live: The Experience exhibit runs through December 31 at the Chicago Museum of Broadcast Communications on State Street.

The Next Big Thing, Carrie J. Sullivan’s grunge rock play, continues its run at the Factory Theater on Friday and Saturday nights at 8:00 p.m. and Sundays at 3:00 p.m. through April 21.

A Funny Thing Happened On The Way To The Punchline, an exhibit on comics, runs through April 21 at the Chicago Literary Alliance.

The 34th Latino Film Festival runs from April 5 through 19 at AMC River East 21.

Modern Motions will be presented by Chicago Repertory Ballet at The Atheanaeum Theatre on April 6 and 7.

The English Beat performs at City Winery Chicago on April 6 and 7.

C2E2 The Chicago Comic and Entertainment EXPO returns to the South Building of McCormick Place on the weekend of April 6 through 8.

The Asian American Showcase runs from April 6 through April 18 at the Gene Siskel Film Center.

The Bad Examples perform at FitzGerald’s in Berwyn on April 7.

The Decemberists come to the Chicago Theatre on April 10.

The 16th Annual CHIRP Record Fair and Other Delights will be held on April 14 at the Local 130 Plumbers Union Hall at 1340 W. Washington in Chicago.

The Sopro Tax Time Relief All-Star Blues Revue will be held on Sunday, April 15 at the Pheasant Run Inn in St. Charles.

The Real Pretenders, a Pretenders tribute takes place at FitzGerald’s in Berwyn on April 19.

The reunited L7 at performs at Metro on April 20.

Flirting With Time: A Tribute To Neil Young takes place at FitzGerald’s in Berwyn on April 20.

Record Store Day, offering limited-edition vinyl releases in every known genre of music, returns on April 21. Watch for in-store performances throughout the area.

Marshall Crenshaw comes to The Old Town School Of Folk Music with The Bottle Rockets for two shows at on April 21.

The Chicago Palestine Film Festival runs from April 21 through May 3 at the Gene Siskel Film Center.

Peter Case, founding member of The Nerves and The Plimsouls, will be at The Old Town School Of Folk Music on April 27.

Jeff Tweedy will be at The Vic on April 27.

Frisbie celebrates its 20th anniversary on April 28 at Martyrs, with special guest The Sunshine Boys.
Posted by Terry Flamm at 10:29 PM