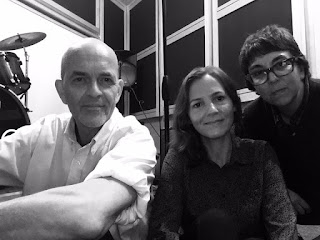 The Sunshines Boys have a great debut album for sale.

Material Reissue has a show tonight at Shank Hall in Milwaukee, Wisconsin. The music starts at 8:00 p.m. with opening act Cabin Essence.

Congratulations to Toronto-based indie rock/synth band Alvvays on selling out its show tonight at Metro. Alvvays has two superb albums to draw material from. Next Friday, Wolf Alice, led by the amazingly versatile vocalist-guitarist Ellie Rowsell, will be at Metro. Wolf Alice’s Visions Of A Life was one of 2017’s best albums.

The Sunshine Boys have a two-part record release show celebrating their debut Blue Music coming up tomorrow. They’ll be at Rediscover Records in Elgin at noon, before heading off for a 3:00 p.m. performance at Val’s Halla in Oak Park. Blue Music is now available on iTunes and Spotify. The band’s song “Billy Boy” rang out over the WLS AM 890 airwaves earlier today.

Ch-ch-changes. As noted on the Sons Of The Silent Age Facebook page, an injury to one of its band members has caused them to cancel tomorrow night's gig at Martyrs’. Space Face, another Chicago-based Bowie tribute act, will be filling in for them.

Also tomorrow night, the engaging indie rock group In Tall Buildings will be performing at Schubas.

Lollapalooza announced its 2018 schedule this past Wednesday, a day after four-days passes went on sale. Surprisingly, those passes didn’t immediately sell out, which gave some potential ticket buyers a rare opportunity to check out the lineup before taking the plunge. Scheduled acts include The Regrettes; St. Vincent; Jack White; Catfish And The Bottlemen; Franz Ferdinand; Portugal The Man; The Weeknd; Bruno Mars; The National; Arctic Monkeys; Vampire Weekend; The Vaccines; Greta Van Fleet; Khalid; Chvrches; and Manchester Orchestra.

Tickets went on sale today for Liz Phair at The Empty Bottle on June 9; legendary surf guitarist Dick Dale at Reggie’s Rock Club on August 10; Stereophonics at The Vic on September 11, and Al Stewart at City Winery Chicago on June 4 and 5.

FitzGerald’s in Berwyn has some interesting shows coming up next month, starting with The Bad Examples on April 7. On April 19, there’s a Pretenders tribute by The Real Pretenders, and the following night offers Flirting With Time: Tribute To Neil Young.

Factory Theater’s latest new production The Next Big Thing uses 1990s grunge rock for Carrie J. Sullivan’s tale of a small town musician who hopes to conquer the Chicago music scene. Allison Grischow stars in the lead role, and Robyn Coffin directs. The Next Big Thing runs on Friday and Saturday nights at 8:00 p.m. and Sundays at 3:00 p.m. through April 21.

The Best Of Tellin’ Tales Solo - A New Kind Of Spring Benefit will be held on Sunday, April 8 at The Edge Theatre at 5451 N. Broadway.

Rock this town’s Independence Day celebration. The Stray Cats will be the co-headlining act with Melissa Etheridge at this year’s RibFest in Naperville on the 4th of July. Steven Tyler of Aerosmith fame will be backed by the Loving Mary band on July 6.

The Chicago European Union Film Festival continues through April 5 at the Gene Siskel Film Center. The 34th Annual Chicago Latino Film Festival runs from April 5 to 19. Over 100 films from Spain, Latin America, Portugal, Canada, and America will be screened at AMC River East 21 at 322 E. Illinois.

The Saturday Night Live: The Experience exhibit runs through December 31 at the Chicago Museum of Broadcast Communications on State Street.

On this Sunday, Millright’s restaurant in Simsbury, CT will have Season 15 Top Chef finalists Adrienne Cheatham and Chris Scott preparing a five course meal and cocktails. The event will benefit the Sarcoma Foundation Of America, in honor their fellow Season 15 contestant Fatima Ali, who is battling cancer.
Posted by Terry Flamm at 9:22 PM