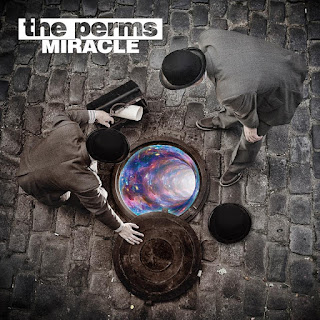 Released late last year, Miracle is the latest in a series of EPs and albums The Perms have released since 1997. The Canadian trio is most notable for the high-powered but consistently precise harmonies of bassist-vocalist Shane Smith and guitarist-vocalist Chad Smith. Drummer John Huver plays a major role in providing the hard-hitting rock behind their impressive singing.

The Perms work predominantly with mid-tempo arrangements this time out but still succeed in keeping their sound adventurous. Their message seems less satiric than on past efforts, particularly on uplifting songs like “Now November” and “Turnaround.” The latter suggests appreciating life, and notes, “What was lost is found.”

“Wanted You To Know” seems to be about a father comforting and supporting his young daughter, and it sports some of Miracle’s most ambitious harmonies. There’s an enticing mix of glam and classic rock on “Be Alright” and “Busy Izzy,” and everything here is produced with radio-ready efficiency. The album ends with the appealing and mostly acoustic “Gone.”
Posted by Terry Flamm at 8:50 PM