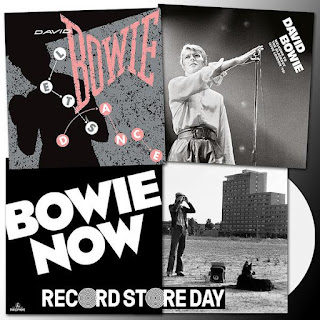 This year’s Record Store Day isn’t until April 21, but information is already starting to trickle out. The Second Disc website, a great source for RSD info, recently reported that three David Bowie releases will be available. They are Welcome To The Blackout, a three-record set of live performances from the artist’s 1978 Isolar World Tour; a 12-inch single with an extended “Let’s Dance” newly remixed by Nile Rogers; and a reissue of the 1978 promo album Bowie Now, on white vinyl. Led Zeppelin will offer a seven-inch single on RSD with previously unreleased versions of “Rock And Roll” and “Friends.”

The Breeders’ new album All Nerve came out today. Other releases due this month include Francis Trouble by Albert Hammond, Jr.; American Utopia by David Byrne; In Your Own Sweet Time by The Fratellis; I’ll Be Your Girl by The Decembrists; Space Gun by Guided By Voices; and Boarding House Reach by Jack White.

Tickets are now on sale for the Pitchfork Music Festival, with Tame Impala, Japandroids, and several other artists on July 20 –22; Yeah Yeah Yeahs at Aragon Ballroom on May 29; Gomez at The Vic on June 15 and 16; Joan Baez at the Chicago Theatre on October 5; and Alan Parsons Project on June 5 at Copernicus Center.

The Continental Drifters are back in action and have a gig coming up on May 26 at the Tipitina’s club in New Orleans. The band includes Peter Holsaple of The dB’s, Vicky Peterson of The Bangles, and Susan Cowsill of the Cowsills.

The Bangles are one of the many big name acts scheduled for the Arroyo Seco Weekend festival in Pasadena on June 23 and 24. Neil Young; Jack White; The Pretenders; Belle and Sebastian; The Specials; Dwight Twilley; Robert Plant and The Sensational Space Shifters; Violent Femmes; and Los Lobos are some of the other artists scheduled to perform.

The world premiere of the Paul Edwards adaptation of Oscar Wilde’s Picture Of Dorian Gray, opens tonight at City Lit, and will run through April 15. The Edwards version sets the drama in New York from 1970 through 1980.

Karen Gillan, who easily transitioned The Doctor’s fiery companion Amy Pond on Doctor Who to the formidable villain Nebula in Guardians Of The Galaxy, has written and directed The Party’s Just Beginning, her first feature film. She also stars in comedy/drama, along with Lee Pace and Matthew Beard. Gillan was on hand when the film had its world premiere at the 14th Glasgow Film Festival on February 24.

The 19th Chicago Irish Film Festival - Films from the Land of Storytelling opened yesterday, and will run through this Sunday at the Gallery Theatre and Logan Theatre. Both venues are located on Milwaukee Avenue. The event will include feature films, shorts, and documentaries.

Abbey Road, which recently added two new studios and a mix stage, was named 2018 Studio of The Year at the Music Producers Guild - MPG Awards yesterday. My wife Pam and I saw Abbey Road when we visited London in 2006, but we weren’t allowed inside.

The Jewish Film Festival opens tomorrow and will run on weekends through March 18. A total of 31 films will be screened at ArcLight Chicago, ArcLight Glenview, Century 12 Evanston/CineArts 6 and Century 16 Deer Park.

The Chicago European Union Film Festival kicks off next Friday, March 9 and will continue through April 5 at the Gene Siskel Film Center.

Hello, It’s Good New News For Todd Rundgren fans. He and fellow Utopia members Kasim Sulton, Willie Wilcox, and Ralph Shuckett are reuniting for a 2018 tour that will bring them to the Chicago Theatre on May 22. Other stops include Denver, Minneapolis, Toronto, Las Vegas, and Atlanta. Plus, The Second Disc website recently covered the new three-CD Todd Rundgren - All Sides Of THE ROXY, which features his residency at the L.A. club back in 1978.

Top Chef contestant (and my nephew) Joe Flamm was the honored guest at a viewing event for his family and friends last night at the Spiaggia restaurant on Michigan Avenue in Chicago. This season had come down to three contenders—Joe, Adrienne Cheatham, and Joe Sasto—and one of them would be eliminated before the finale next week. The mood in Spiaggia’s third-floor party room was anxious but festive, and I doubt my wife Pam and I were the only ones impressed with the bond that has developed among these competing chefs. The episode also had its fun and humorous moments, and it was a kick to see former Season 15 contestants Carrie Baird, Chris Scott, and Bruce Kalman come back to help out. In the end, Joe Flamm was the first chosen to move on to next week’s finale, followed by Adrienne Cheatham. Joe Sasto, AKA, Mustache Joe, was eliminated from the competition.

A tip of the chef hat to Mustache Joe. After seeming a bit controlling at first, he now comes across as big-hearted and funny. He’ll be in town next Wednesday for the sold-out Joe-Down Throw-Down Dinner with Joe Flamm at Spiaggia.

On March 25, the Millright’s restaurant in Simsbury, CT will host Adrieene Cheatham and Chris Scott for a five course meal and cocktails to benefit the Sarcoma Foundation Of America in honor former season 15 contestant Fatima Ali, who is battling cancer.
Posted by Terry Flamm at 10:05 PM