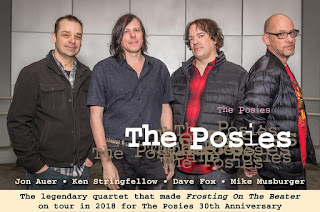 Tickets go on sale this Friday at 10:00 a.m. for the dream power pop pairing of The Posies and Material Reissue at Park West on Saturday, June 23. The Posies are in the midst of a 30th Anniversary Tour and will be performing with their Frosting On The Beater era lineup. This is the second time Material Reissue has snagged the opening slot for a stellar power pop act at Park West. They were with Matthew Sweet back in September 2016.

Ken Stringfellow of The Posies will join Italian garage rock/power pop band The Sick Rose for a “an Italia mini promotional tour” in mid April, according to band member Giorgio Cappellaro. Stringfellow produced the band’s new and very catchy Someplace Better album, which is now available on vinyl, CD, and Bandcamp.

It’s also an important event for opening act The Handcuffs. The coed quintet, led by singer-guitarist Chloe F. Orwell and drummer Brad Elvis, have been hard at work on a new album (their fourth), and plan to unveil some new songs during their Martyrs’ set. Previous releases have sprung songs onto popular TV shows, so it will be interesting to see if that happens with any of the new stuff. The Handcuffs will return to Laurie’s Planet Of Sound for a 4:00 p.m. in-store performance on Record Store Day, although I don’t know if they’ll be playing new songs at that gig.

Tommi Zender and Phil Angotti are also Laurie’s Planet Of Sound Record Store Day regulars and they’ll be performing in separate shows this year. There’s a rumor Angotti will be covering The Kinks. I hate to sound like a broken record (pun intended), but I’m still waiting for a Hollies tribute at one of these LPOS RSD events.

The Vintage Vinyl store in Evanston will have a live performance by avant garde/alt rockers whitewolfsonicprincess at 11:00 a.m. Guitarist-vocalist James Moeller, who founded the band with vocalist Carla Hayden, suggested in a Facebook post that they might play a few covers. “Probably not a Doobie Bros song, but maybe Townes Van Zandt, The Doors, Big Mama Thornton, The National, or Drive By Truckers.”

The Val’s Halla store in Oak Park usually offers hours of Record Store Day performances but I haven’t seen a schedule for this year yet. Psychedelia masters The Luck Of Eden Hall traditionally do the RSD thing. Check your favorite artists’ social media pages to see if they have any RSD gig scheduled.
Posted by Terry Flamm at 9:25 PM