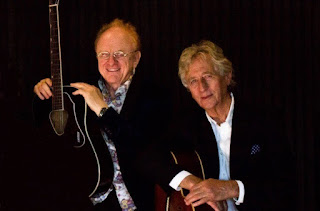 Peter Asher and Jeremy Clyde will be at Old Town School Of Folk Music tomorrow.

The WNUR radio program Power Pop Shoppe has done well with its first few live shows, but the one tonight at The Elbo Room is bound to be extra special. Local acts Phil Angotti, The Cells, The Thin Cherries, King Mixer, The Joy Poppers, Mark Watson Band, The Sh***y Amps, Love Punch, and others will take part in a tribute show to honor power pop icons Pat DiNizio of The Smithereens and Tommy Keene. All proceeds from the event will go to the Felines and Canines Dog Rescue Shelter in Edgewater.

Chicago psych group Umbra and the Volcan Siege are marking the vinyl, cassette and digital release of their latest album, Someone Will Love You But It’s Just Not Me, with a free show tonight at the Virgin Hotel in downtown Chicago.

The week of English gentlemen. Some key members of the original British Invasion will be performing in the Chicago area. Tomorrow night’s Peter and Jeremy gig at The Old Town School Of Folk Music will surely confuse anyone who got Peter And Gordon with Chad and Jeremy mixed up in the 1960s. This show gives us one from each duo; Peter Asher and Jermey Clyde. Graham Nash, who founded The Hollies with childhood friend Allan Clarke before moving on to Crosby, Stills, Nash and Young, and a successful solo career, has a show tomorrow night at The North Shore Center For The Performing Arts. The invasion continues this Monday and Tuesday when The Zombies rock City Winery Chicago.

The Ravinia Festival, one of the Chicago area’s favorite places to see music outdoors, has announced its 2018 lineup. The dates run from June 1 through September 16 and cover just about every genre. Some of the acts scheduled are Roger Daltry with members of the Ravinia Festival performing Tommy; Lyle Lovett and His Large Band; Los Lobos; Diana Ross; John Fogerty and ZZ Top; Anita Baker; Sugarland; Jackson Browne; A Flock Of Seagulls; Janis Ian; Juilliard String Quartet; John Hiatt and The Goners; Culture Club, The B-52’s and Thompson Twins; Yes; Bonnie Koloc and Howard Levy; Johnny Rivers and Jimmy Webb; Earth, Wind and Fire; James Galway; Ian Anderson; Trombone Shorty and Orleans Avenue; Buddy Guy and Jonny Lang; Cake and Ben Folds; The Beach Boys; and Alison Krause. Tickets can be purchased for the pavilion or the lawn.

If there are any parents in Chicago wondering why their teenagers are so well behaved this weekend it could be because four-day tickets to Lollapalooza go on sale on Tuesday. The festival runs August 2 through 5. Per tradition, the schedule has yet to be announced.

Alt rock band Alvvays, whose 2017 Antisocialites album was favorably reviewed here on BHT, will be will be at Metro next Friday, March 23.

The Sons Of The Silent Age will be paying tribute to David Bowie in their usual funky, atmospheric, and all-around impressive way at Martyrs’ next Saturday, March 24. The band comprises several veterans of the Chicago rock scene, including vocalist Chris Connelly of Ministry and Revolting Cocks fame.

The engaging indie rock group In Tall Buildings will be performing at Schubas next Saturday.

The Sunshine Boys have a two-part record release show celebrating their amazing debut Blue Music coming up next Saturday. They’ll be at Rediscover Records in Elgin at noon, before heading off for a 3:00 p.m. performance at Val’s Halla in Oak Park.

Factory Theater plunges into the late 1990s grunge rock scene with its current production The Next Big Thing. Carrie J. Sullivan’s play features original music in a tale of a small town musician named Beth who hopes to conquer the Chicago music scene. Allison Grischow stars in the title role, and Robyn Coffin directs. The Next Big Thing runs on Friday and Saturday nights at 8:00 p.m. and Sundays at 3:00 p.m. through April 21.

The Jewish Film Festival is about to wrap up its run three weekend run. Films are being screened at ArcLight Chicago, ArcLight Glenview, Century 12 Evanston/CineArts 6 and Century 16 Deer Park. The Chicago European Union Film Festival continues through April 5 at the Gene Siskel Film Center.


Millright’s restaurant in Simsbury, CT will have Season 15 Top Chef finalists Adrienne Cheatham and Chris Scott preparing a five course meal and cocktails on Sunday, March 25. The event will benefit the Sarcoma Foundation Of America, in honor of their fellow Season 15 contestant Fatima Ali, who is battling cancer.
Posted by Terry Flamm at 8:37 PM