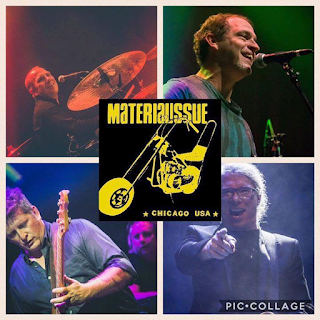 Chicago area power pop fans can catch one of the best acts of that genre tomorrow night if they don’t mind traveling a bit. Material Reissue, which features original Material Issue members Ted Ansani and Mike Zelenko, along with singer guitarist Phil Angotti and guitarist Jay O’Rourke, have a show at Shank Hall in Milwaukee, Wisconsin. It’s a treat to watch these guys can carry on the catchy and emotionally potent music penned by the late Jim Ellison. Material Issue took MTV by storm back in 1991 with its black and white video for “Valerie Loves Me,” and went on to release power pop gems like “Diane,” “Renee Remains The Same” and “That’s What Girls Want.” Tomorrow night’s show starts at 8:00 p.m. Cabin Essence, a band that’s pretty much Nick Maas on record but includes additional musicians when performing live, will be the opening act.

Meanwhile, in Chicago, Alvvays will be performing a sold-out show at Metro tomorrow night. The Toronto-based band switches easily from atmospheric dreamscapes to energetic alt rock, with lead vocalist-guitarist Molly Rankin leading the way. Hearing songs like “Plimsoul Punk” and “Lollipop (Ode To Jim)” from its 2017 album Antisocialites should be a blast, and Alvvays can also draw from its stellar 2015 self-titled debut. The doors open at 7:30 p.m.
Posted by Terry Flamm at 9:37 PM