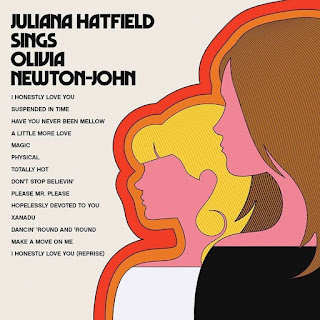 Being mellow is much better than hating your sister.

I was glad to be able to snag a ticket today for the The Posies and Material Reissue show at Park West on Saturday, June 23. The Second Disc website has a post today about expanded reissues of the classic Posies albums Dear 23, Frosting On The Beater, and Amazing Disgrace. Each two disc set comes with loads of bonus tracks. Dear 23 includes an alternate version of the cover of “King Midas In Reverse” The Posies recorded for The Hollies tribute album Sing Hollies In Reverse in 1995.

The Bad Examples will be performing at FitzGerald’s in Berwyn next Saturday, April 7.

I thought this was an April Fools’ Day joke when I saw it listed in the April issue of the Illinois Entertainer, but Juliana Hatfield has indeed recorded an album of Olivia Newton John covers that’s due out April 13. Hard to imagine what the world’s number one Hatfield fan—Frank Carr from the Famous In The Future comedy group—thinks of this, but maybe she ran it past him.

The April IE also has a piece on the Molecule 8 limited edition 1:6 scale (12 inches) trio of John Lennon figurines approved by Yoko Ono. The extremely lifelike statue sculpted by K.A.KIM captures Lennon from his “Imagine” period. IE doesn’t mention a price, but the email I received regarding the Lennon figure has a Pre-order link that shows the price at $299.99. I’d love to see Molecule 8 raffle one off and donate the money to a charitable organization.

In other Beatles news: Congratulations to writer Vivek J. Tiwary (and Sonar Entertainment) on working out a deal with the Bravo channel to have his graphic novel The Fifth Beatle: The Brian Epstein Story developed into a mini series. According to The Holywood Reporter, The Fifth Beatle project will have rights to use songs composed by Paul McCartney and John Lennon, and is working toward securing rights to George Harrison’s Beatles compositions. Tiwary was a featured guest at last year’s Fest For Beatles Fans – Chicago, and gave a fascinating talk about how he researched the book, selected artists, and then began exploring film possibilities once the graphic novel was completed.

The Best Of Tellin’ Tales Solo - A New Kind Of Spring Benefit will be held on Sunday, April 8 at The Edge Theatre at 5451 N. Broadway.

My nephew and Top Chef champion Joe Flamm will be preparing a five-course spring menu with wine pairings created by Rachael Lowe at Spiaggia on April 16. The price is $200. He’s the executive chef at the Michigan Avenue Italian restaurant. Also, congratulations to Spiaggia Chef and boss Tony Mantuano on coming in at number 19 on New City magazine’s Chicago’s Food And Drink 50 feature in its April issue.

Chicago Tribune writer Tracy Swartz had a funny piece in this past Wednesday’s issue noting how my nephew Joe was starstruck when actress Emmy Rossum mentioned him in a video about the Top Chef finale, even though Rossum wanted Adrienne Cheatham to win. Rossum portrays Fiona Gallagher on the TV show Shameless; Rich Cotovsky, who had a role on the show, ran the annual Abbie Fest as part of his Artistic Director duties at Mary-Arrchie Theatre; and I performed at Abbie Fest several times as a member of the Famous In The Future comedy group. So there’s some sort of six degrees of separation thing between me and Emmy Rossum going on here.

Speaking of six degrees, tickets are now on sale for The Bacon Brothers gig at City Winery Chicago on July12. That’s an entire room of people who will become part of the six degrees of Kevin Bacon game.

The Chicago European Union Film Festival continues its run this weekend at the Gene Siskel Film Center. The 34th Annual Chicago Latino Film Festival will run from April 5 to 19. Over 100 films from Spain, Latin America, Portugal, Canada, and America will be screened at AMC River East 21 at 322 E. Illinois.

I’m not sure is this will be a regular feature, but here’s This Week’s Vinyl Purchase At Reckless Records. I dropped by the downtown location yesterday and picked up a limited edition blue vinyl seven-inch single of “Lenny” by Supergrass. It’s an English import on the Parlophone label.
Posted by Terry Flamm at 10:37 PM