Count Vaseline – Tales From The Megaplex 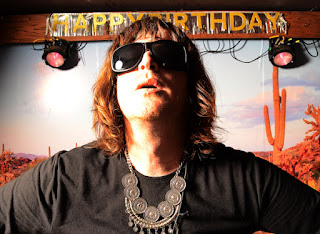 Dublin native/current Atlanta, GA resident Stefan Murphy recorded albums and EPs with his band The Mighty Stef for 10 years before reinventing himself as Count Vaseline in 2017. His debut effort Tales From The Megaplex evokes swamplands rather than lush Irish pastures, with his deep vocals and twangy guitar adding to the off-kilter fun. The eight tracks zip by in flash but each makes a lasting impression.

Count Vaseline’s rock-a-billy take on Ween’s “I’ll Be Your Johnny On The Spot” is just a bit over a minute and a half long, and he crafts an informative and humorous (though not necessarily fair) comparison of John Cale and Lou Reed on “Hail Hail John Cale” in even less time. He weaves a few oddball narratives throughout the exotic rhythms of “Heavy Is The Head That Wears The Crown.” The title track uses the same bare-bones punk meets 1960s rock method that worked so well for The Ramones.

On other tracks, Count Vaseline opts for a more quirky, B-52’s approach by adding keyboards. “Song For Tom” honors a man whose adventures across the galaxy couldn’t bring him love. “He was a very good man but he died alone.” Alluring backup vocals and a dreamy arrangement provide an ironic setting for “What’s Your Name, Where Are You From, What are You On,” a song that asks people to identify themselves and their chosen drug.
Posted by Terry Flamm at 8:45 PM