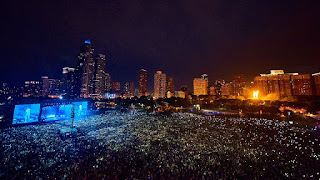 For the first time in anyone’s memory, four-day passes for Lollapalooza did not immediately sell out this year. There are various social and economic theories as to why this happened, but the most likely one involves the fear of God. Lolla veterans have never worried about incurring eternal damnation, but apparently they thought The Almighty might be there this time around. At least in spirit.

Shortly before this year’s passes went on sale, a rumor erupted on Twitter that Educational Media Foundation, the Christian broadcast company that converted long-time Chicago hard rock station The Loop into a K-Love format, had also bought out Lollapalooza. Several #Holy-palooza tweets sparked visions of performers singing “Kumbaya” and sensibly attired millennials roasting s’mores over a campfire. In other words, activities more in line with Jerry Falwell than Perry Farrell.

The release of this year’s schedule was enough to reassure fans who attend Lollapalooza to see their favorite acts that the rumors were unfounded. But it wasn’t much help for scenesters who don’t know any bands and are only interested in partying. They were still sitting on the sidelines while actual music fans snapped up the remaining passes. There’s a chance the party types might catch on before the single-day passes sell out, but a lot of Lollapalooza regulars are praying then don’t.

The above article is not true and is only intended for satirical purposes.
Posted by Terry Flamm at 2:12 PM