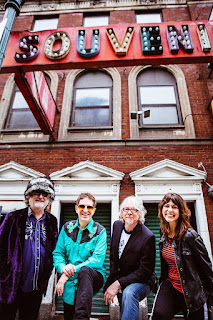 This is my second post today. See the earlier one for information on Record Store Day, International Pop Overthrow, and All Things BBC!.

Depending on what time you read this, there might still be time to catch the Flirting With Disaster Neil Young Tribute at FitzGerald’s in Berwyn tonight. The always adventurous cover band EXPO ’76 will be performing in the Side Bar at FitzGerald’s.

International Pop Overthrow - Chicago kicked off tonight and will run through next Saturday, April 28 at the Heartland Cafe Bar, with multiple band showcases each night.

Tomorrow will your last chance to check out A Funny Thing Happened On The Way To The Punchline, an exhibit on comics, at the Chicago Literary Alliance.

Tickets went on sale today for Baseball Project at SPACE in Evanston on August 4. Hopefully, by that time the Cubs and the White Sox will be sitting comfortably atop their respective divisions. Previous shows by the national pastime inspired all-star band have included Mike Mills and Peter Buck from R.E.M.; Scott McCaughey from Young Fresh Fellows and Minus 5; Steve Wynn from The Dream Syndicate; and drummer Linda Pitmon.

Tickets also went on sale for New Pornographers at Thalia Hall on June 21.

There will be an opening reception on May 12 for the Tony Fitzpatrick: The Secret Birds exhibit at the DePaul Art Museum. On May 23, Fitzpatrick will have a conversation with Chicago Tribune writer Rick Kogan from 6:00 to 7:30 p.m. at the museum.

The Chicago Toy Show returns to the Kane County Fairgrounds in St. Charles this Sunday for the first of its two events there in 2018. In addition to collectibles, action figures, Matchbox cars, and Star Wars treasures, the show also offers a fair amount rock and roll memorabilia.

The Buddy Holly Story kicks off a month-long run next Friday, April 27 at the American Blues Theater. Lili-Anne Brown will direct the Alan Janes play; with music directed by Michael Mahler.

Chicago-based power pop band Frisbie will be celebrating its 20th anniversary with a gig at Martyrs next Saturday. The Sunshine Boys, who haven’t celebrated their first anniversary yet but have years of experience in various other bands, are also on the bill that night.

There will be a Van Go Concert! Event next Saturday at Phyllis’ Musical Inn on Irving Park Road. The Chicago-based band, which has a flair for energetic, catchy songs that frequently pack a satirical punch, will be showcasing its upcoming album. Deadly Bungalows, Trita, and Kosi and the Thomas Matecki Trio are also on the bill that night.

A Charlie’s Angels graphic novel series will make its debut in June. I wonder if the artists will break from the 1970s TV drama by actually drawing Charlie.

My nephew Joe Flamm, who won this past season’s Top Chef honors on the Bravo Channel, will be throwing out the first pitch at the Chicago White Sox game this Sunday.
Posted by Terry Flamm at 10:14 PM