The Return Of The Rock For Kids Rock And Roll Auction 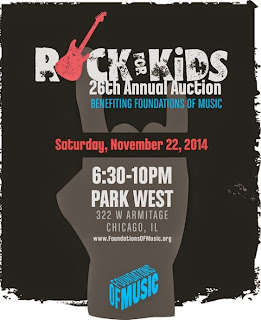 The Rock For Kids Rock And Roll Auction returns to the Park West on Chicago’s north side for its 26th year on Saturday, November 22nd. WXRT air personalities Lin Brehmer and Marty Lennartz will once again co-host this annual charity event, which benefits Foundations Of Music. It’s an organization that helps provide music education to children who might not otherwise have that opportunity. There will also be DJ sets by DJRC, and live music by the student-comprised groups Morphtet and The Foundations of Music Blues Band.

Rock For Kids is well known for offering a fascinating selection of memorabilia from musicians and other celebrities. Some of the treasures attendees can bid on this year include a WXRT Lollapalooza Weekend package; The Ramones Anthology signed by the original members, the Heart vinyl LP Fanatic signed by Ann and Nancy Wilson; a hat signed by The Cure; a framed photograph of John Lennon; a Brian Wilson-signed DVD of Pet Sounds - Live In London; a Ray Davies guitar pick; and a Wilco and Flaming Lips New Year’s poster. There will be a silent auction and a live auction; see the Rock For Kids website for details and the complete list.

Not everyone has the money to snag one of these rare items, but Rock For Kids is fun even for those who are just there to watch. At times, the auction takes on the ambience of a playoff game as the bidding gets ferocious. And in the end, it will be Chicago area kids who will be the winners. Early Bird tickets can be purchased for $75 through November, after that they’re $125.
Posted by Terry Flamm at 10:58 PM