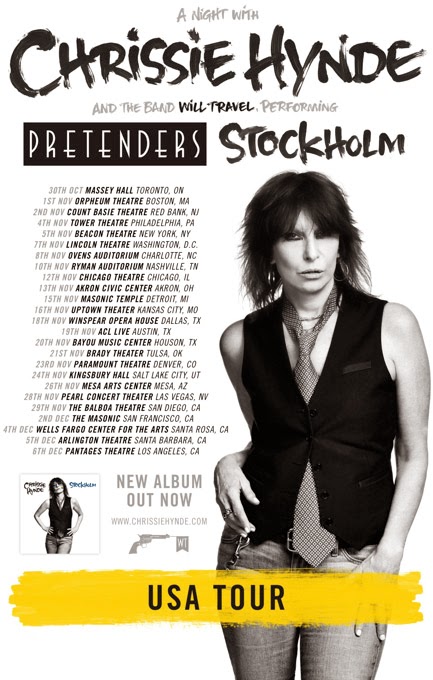 Chrissie Hynde has been to Chicago a number of times with The Pretenders, but her gig next Wednesday at the Chicago Theatre will be in support of her solo debut Stockholm. Hynde is likely to play a mix of songs from that effort as well as some well-chosen Pretenders gems. In my review of Stockholm earlier this year for the Illinois Entertainer (and posted later here), I wrote that the album finds Hynde breaking new ground while still playing to her strengths. Those who enjoy Wednesday night’s show might want to get up early on the day after Thanksgiving to snag the one-day only release of the six-song Stockholm Live At The 229 Club, London, England on colored vinyl. It’s one of the Black Friday Record Store Day releases.

Drummer Brad Elvis is used to traveling around the universe with The Romantics, but his Chicago-based band The Handcuffs with have a rare out-of-state show tomorrow night in Nashville when they perform with Bill Lloyd, and the Big Star A to Z tribute band at The Basement.

Chicago Art Magazine has reached 96% of its goal on IndieGoGo to raise funds to save its archive of over 1,000 articles. Although the online publication closed in 2012, former Editor-In-Chief Kathryn Born points out that the site was still drawing visitors until last month, when it was hobbled by a malware attack. The money raised through IndieGoGo will go to update and protect Chicago Art Magazine and its related websites.

I’m proud to say I contributed a number of articles to Chicago Art Magazine, and the other online publications Born produced with the help of Managing Editor Robin Dluzen, including Chicago DIY Film, TINC, and Chicago Performance And Trailers. It’s nice to see they still have such enthusiastic support from the Chicago art community.

Let’s all silly walk to Downers Grove. John Cleese, who possesses one of this generation’s sharpest comedic minds, will be at the Tivoli Theatre in Downers Grove to discuss his new book So, Anyway on Tuesday night. The appearance is being sponsored by Anderson’s BookShop. The $36 admission includes a pre-signed copy of the book.

The Telepaths, a garage rock band that includes journalist-musician Pat Über-Critic McDonald and musician-actor-writer James Moeller, will be performing their guitar-driven songs at The Mutiny tomorrow night. The club is located at 2428 N. Western in Chicago, show time is 9:00 PM.

California man David Bash has been enjoying himself in New York, where his International Pop Overthrow power pop/indie rock fest has been making its annual five-day/seven show visit. It runs through this Sunday, November 9th, at the Bar Matchless club in Brooklyn. This weekend’s highlights include The Lannie Flowers Band, Dave Rave, and The Anderson Council.

Drummer Dennis Diken will continue touring with The Smithereens, and he’ll join Jonathan Lee and Tom Currie of The Jigsaw Seen as they back singer-guitarist Dave Davies of The Kinks in a series of upcoming gigs. That includes the November 12th and 13th dates at City Winery - Chicago next week. Brad Cole is the opening act for those Chicago gigs.

Ian Hunter And The Rant Band will be at Park West in Chicago next Friday, November 14th.

Folk singer-guitarist Quinn Tsan will drop by Constellation at 3111 N. Western Avenue in Chicago next Friday, November 14th to celebrate the release of her Good Winter EP at in Chicago. Passerines and Kelsey Wild are also on the bill. The show starts at 9:30 PM.

ChillFest returns for its second year next Saturday, when it will present 85 acoustic performances over the course of six hours. The festival kicks off at noon and will take place throughout Wicker Park and Bucktown; involving venues like Subterranean, Lottie’s Pub, David’s Tea, Bar Bar Black Sheep, and The Smoke Daddy. Performers include Urban Twang, Liz Chidester, Blue Line, Tijuana Hercules, and Acoustic Raccoon. There will be an after-party at Subterranean, starting at 7:15 PM.

Seven bands will be performing at a benefit for Wicker Park business owner Tiffany Dean at the Double Door club on November 19th. Black Cat Heart Attack; The Artist Formally Known As Vince; The Dead On; Anger; The Ladies And Gentlemen; Sunken Ships; Dorian Taj; and Cochinas y Los Pistoleros are the musical guests, and Herb Rosen from the Liars Club will serve as host. The doors open at 7:30 PM, admission is $8.

Vocalists-guitarists Mike Cohen and Jeff Janulis will lead their tribute band The Everly Hillbillies to Simon’s Tavern on November 23rd. The duo also fronts the all-original power pop band The Abbeys, and this side-project is a labor of love since these guys were heavily influenced by The Everly Brothers when it comes to harmony vocals.

Indie rock trio Fort Frances, whose album Harbour was reviewed favorably here on July 31, 2013, has recorded a video showing band members David McMillin, Jeffrey Piper, and Aaron Kiser seated at a piano while playing the Sufijan Stevens song "Chicago." The result is a stark but effective version that calls to mind the way Gary Jules interpreted the Tears For Fears song “Mad World.” Fort Frances will be performing at Lincoln on December 12th.

Plastic Seoul. Paul McCartney’s official website and his Facebook page recently reported that the Linda McCartney Retrospective is now open to the public at The Daelim Museum in Seoul, Korea. The exhibition features a combination of photographs of rock stars and more personal images from her times with Paul. I have a copy of the Linda McCartney’s Sixties: Portraits Of An Era book, which follows the same format, and it’s amazing. So, I’ll just add this and the British Invasion exhibition at The Beatles Story in Liverpool to the list of things that MUST come to Chicago.

I wish they still played garage rock like they did on their first two albums, but after a misfired song or two, the Paris-based Plastiscines have now settled comfortably into their more techno-oriented music. “Back To The Start,” the official video of the title track of their latest release, underscores the song’s light, melodic arrangement with a slice of life look at the band members hanging out and having fun with friends. As far as I can tell, Back To The Start is still not available in America.
Posted by Terry Flamm at 11:43 PM