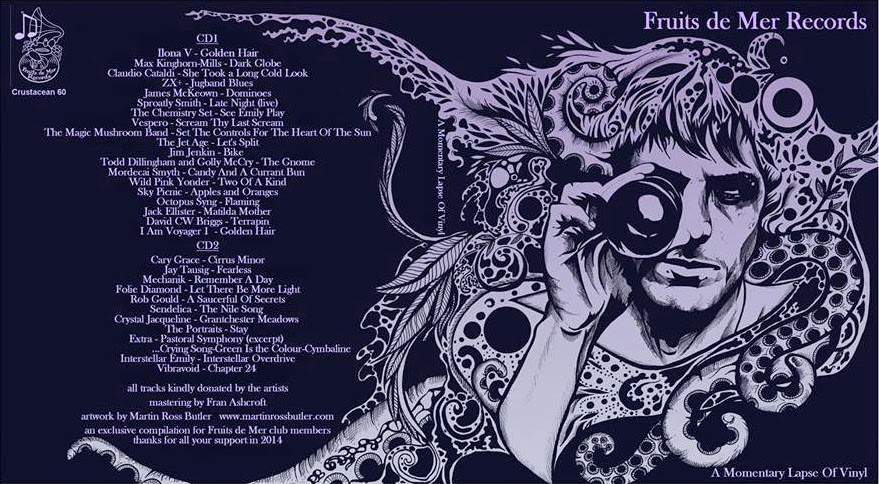 Good news, bad news, good news for Syd Barrett fans. The UK indie label Fruits de Mer has put together a two-CD tribute to The Madcap called A Momentary Lapse Of Vinyl that features a number of current prog and psychedelic rock bands. But it’s only being made available to Fruits de Mer club members and if you aren’t one already, I’m pretty sure you’re out of luck. Visitors to the official website can hear tracks from the exclusive album, including covers of “Let There Be More Light,” “Dominoes,” “Bike,” “Terrapin,” and “Apples And Oranges.”

I spent an hour standing outside the Reckless Records in downtown Chicago today, waiting to partake in some Black Friday Record Store Day shopping. By the time I got to the counter, they had already sold out of the Beatles’ “Long Tall Sally” EP, but I was able to get Chrissie Hynde’s Stockholm Live At The 229 Club, London, England, which was also high on my list. (I won’t be reviewing it any time soon because it’s going to be a Christmas present from my wife.) There wasn’t as much of a crowd outside Reckless today as for the April version of Record Store Day, but it was more than I remember there being last year. By the way, I dropped off some of my new Broken Hearted Toy buttons at the front of the store, so they’re probably already going for a fortune on eBay.

The TesserAct Theatre Ensemble wraps up its run of The Christmas Schooner at Cutting Hall with shows tonight, tomorrow, and Sunday afternoon.

Put on your pork pie hat and dance off those Thanksgiving pounds. Chicago’s renowned ska band Heavy Manners has a show tomorrow night, November 29th at Mayne Stage on Chicago’s far north side. The band will be selling and autographing copies of its heavier than now CD, which includes vintage hits like “Flamin’ First,” “Hometown SKA,” “Taking The Queen To Tea,” and “Blue Beat.” Run and Punch and NEO DJs Suzanne Shelton and Glenn Russell are also on the bill.

Ralph Covert, of Ralph’s World and The Bad Examples fame, has a CD release party coming up at at Schubas on December 6th for his new 13-track The Accidental Soundtrack.  Covert recorded it with Bad Examples mate Steve Gerlach and Michael Hartigan. He’ll be opening that night at Schubas for Verve Pipe.

The 11th Annual Waco Weekend, featuring The Waco Brothers will also be taking place at Schubas. Hushdrops will be the opening act on December 27th.

Get It On is presenting PowerPop Fest! next Friday, December 5th at the Debonair Social Club on Milwaukee Avenue. Three bands, The Typical, Peasantry, and The Viaducts, are on the bill. The music starts at 8:00 PM, admission is $10.

Chicago-based band Mutts will have an LP release party for its latest effort Fuel Yer Delusion vol. 4 next Saturday, December 6th at Metro. Archie Powell And The Exports, The Kickback, and the Cincinnati band Pop Goes The Evil will also be on hand.

A Who’s Who Of Hoodoo Gurus. There will be a Hoodoo Gurus reunion down under this Sunday night when all the past and present members of the Australian power pop/garage band come together for Be My Guru - The Evolution Revolution at the Scarborough Beach Amphitheatre. Special guests will be Ratcat, Jebediah, and British India. According to a recent Facebook post, Hoodoo Gurus also recently shared a double bill with Mental As Anything of “If You Leave Me Can I Come Too?” fame. “We had a great time and the Mentals sounded fantastic too,” the post read. “It’s way too long since we played together (I think it’s been 17 years - bloddy hell!).”

Coffee Planet in Rolling Meadows has begun a new series of Acoustic Night Jam sessions on the first Friday of each month. The first takes place on December 5th. Local singer-guitarist Ian Frees will be one of the participants. Coffee Planet has also hosted poetry nights and displays the work of local artists.

EXPO ‘76 and The Total Pro Horns have a Holiday Dance Party scheduled for December 19th at Mayne Stage on Chicago’s north side. This eclectic cover band has so much material in its repertoire, I’m sure it will be able to break out a few holiday tunes.

A friend let me know about Graham Nash making a special guest appearance on Howard Stern’s Howard 101 radio program on SIRIUSXM. I wasn’t able to hear it because I’m not a subscriber, but there are two clips of Nash performing solo versions of his classic “Teach Your Children” and the new “Back Home” on acoustic guitar. The latter song is a touching tribute to the late Levon Helm.

Rich Cotovsky, known for almost 30 years of cutting-edge work as the Artistic Director for Mary-Arrchie Theatre on Chicago’s north side, is moonlighting again as the lead character in the critically acclaimed play Hellcab. It runs through January 4th at Profiles Theatre.
Posted by Terry Flamm at 7:22 PM