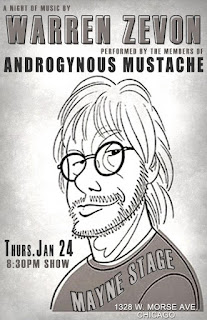 Poster artwork from Androgynous Mustache Facebook page.
Androgynous Mustache will be performing songs by Warren Zevon as part of a Birthday Bash being held for the late singer this Thursday night, January 24th, at Mayne Stage on Chicago’s north side. Androgynous Mustache did a fantastic job of covering The Replacements at a Halloween Tribute show at Martyrs’ last year, so their take on Warren Zevon should be interesting.
Archie Powell And the Exports, who nabbed the Number 2 spot on the Broken Hearted Toy Top 40 CDs of 2012 list, have a show at Goose Island in Wrigleyville on January 25th to benefit the My Sandy Hook Family Fund. The event’s promoters, Vicarious Venues, have promised to match the amount raised by Archie Powell And The Exports. The bands Mutts, Brother George, and 500 Miles to Memphis are also on the bill.
Miles Austrevich was the inspiration for Jokes4Miles, an organization created by stand-up comedian Len Austrevich as a means to help his son cope with brain cancer. While Len worked tirelessly behind the scenes, it was Miles who captured the media’s attention with his quiet determination and cheerful personality. When Miles passed away shortly before Christmas, it was only natural to wonder how Jokes4Miles would continue without him. A memorial/celebration this past Saturday night at the organization’s impressive new digs at 3660 W. Irving Park Road offered some very positive signs.
“How cool is it that you’re still coming out for Miles?” Spencer Tweedy asked the audience, shortly after his band, The Blisters, took the stage. Tweedy is the son of Wilco musician Jeff Tweedy and a former classmate of Mile Austrevich. The quartet of high school students strummed guitars and covered songs by The Band without the benefit of microphones, but sounded highly professional. Earlier, an indie rock musician performed a solo set, and one of Austrevich’s former teachers wove his memories of Miles into a consistently funny stand-up routine.
But the most encouraging moment was when Tom and Stacey Sutter came onstage to talk about Cal’s All Star Angel Foundation, the charity they started in 2006 after their son Cal lost his battle with leukemia. The Sutters honor their son’s memory by helping the families of other children who have serious illnesses, and they had crossed paths with the Austreviches a while back. On Saturday night, Stacey Sutter echoed Len Austrevich’s earlier vow to help parents navigate the confusing and financially difficult paths of caring for a sick child. Stacey called for everyone in crowd that night to think about how they could help others in need. It looks like Jokes4Miles will continue doing that.
Posted by Terry Flamm at 11:11 PM