Number One With A Brother 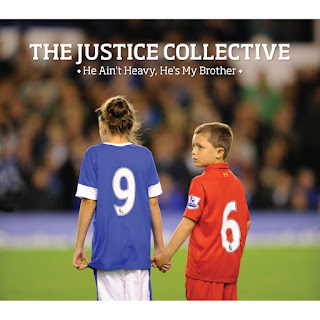 Toward the end of November, I did a post about The Justice Collective’s re-recording of the Hollies’ hit, “He Ain't Heavy, He’s My Brother.” The all-star band had hoped their version would become the U.K.’s Number One Christmas Single for 2012, and I’m happy to report they’ve succeeded.

Last year, The Justice Collective gathered several well-known English musicians, including Paul McCartney, Robbie Williams, Glen Tilbrook from Squeeze, Gerry Marsden from Gerry And The Pacemakers, Shane McGowan from The Pogues, Mick Jones from The Clash, John Power from Cast, Dave McCabe from The Zutons, Chris Sharrock from Oasis, Holly Johnson from Frankie Goes To Hollywood, and Melanie C from The Spice Girls, to help families of the victims of The Hillsborough Disaster. In 1989, 96 Liverpool soccer fans were killed during a Football Association Cup Semi-Final match with Nottingham Forest at the Hillsborough Stadium in Sheffield.

Tony Hicks and Bobby Elliott, original (and still current) members from The Hollies, were asked to join in, and gladly obliged. The Liverpool Philharmonic Orchestra and LIPA Gospel Choir were also involved, as were a few former members of the Liverpool soccer team. The new version has the same gorgeous harmonica intro as the original, this time played by musician Will Pound, and the arrangement stays faithful to The Hollies hit. The various stars take turns on lead vocals; McCartney and Jones contribute guitar solos and Sharrock plays drums.

The Justice Collective's “He Ain't Heavy, He’s My Brother” is available on iTunes, and the actual CD single can be purchased from Amazon. And to get the full impact of this inspiring rendition, I highly recommend watching the video.
Posted by Terry Flamm at 11:21 PM