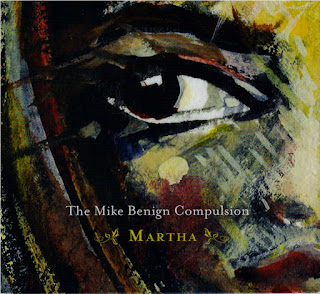 This second release from The Mike Benign Compulsion could be celebrated simply on the basis of its striking melodies and elaborate vocal interplay. The Milwaukee-based band of rock veterans plays a distinctively Midwestern strain of power pop and alt rock on Martha, which was mixed by Chris Stamey of The dB’s. Still, there are darker pleasures to be found by delving into singer-guitarist Mike Benign’s portraits of down-and-out losers and frustrated lovers.

The energetic “American Dreaming And Drunk” is the most obvious juxtaposition of stinging lyrics and fetching music, while some of the other tracks, like “My Michelle,” can be more tricky. The chorus on the baroque pop song, “I Won’t Let You Down” adds the word “again” to the title; suggesting a guy with a history of not coming through, and the good vibes generated in the Beach Boys-flavored “I’ve Never Felt As Good As I Do Now” depend on maxing out credit cards and being oblivious to other people’s suffering. On the acoustic “Tattoos Of Bruises,” Benign nails a self-destructive couple with lines like, “He made the money grow wings and fly free.” The Mike Benign Compulsion might not think much of the common man, but they do create a catchy fanfare.
Posted by Terry Flamm at 11:49 AM