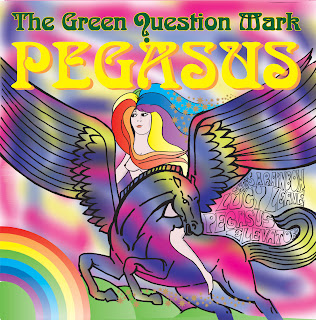 I’m not clear on whether Pegasus by The Green ?uestion Mark is a one-shot collaboration on some vintage psychedelic tunes, or the debut from a new British band. The members consist of radio personality/vocalist Marrs Bonfire; producer Icarus Peel; eccentric musician Mordecai Smyth (whose Sticky Tape And Rust album was favorably reviewed here on Broken Hearted Toy); and the mysterious Chrystal Jacqueline, who’s simply described as ‘talented.’ One thing is for sure: None of these people are using their real names.

That said, The Green ?uestion Mark’s Pegasus EP, which is available as a limited edition green vinyl record as well as in digital form, is a lot of fun. Of course, any band that features an obscure Hollies tune as its title track is likely to snag a favorable write-up on BHT. Bonfire and his mates give “Pegasus,” (which was originally a rare opportunity for guitarist/harmony vocalist Tony Hicks to sing lead) an arrangement reminiscent of The Hollies mid-1960s classic LPs, Evolution and Butterfly.

The Green ?uestion Mark’s take on “She’s A Rainbow” is more ornate than the Rolling Stones version but still rousing, while their cover of Syd Barrett’s “Lucy Leave” comes across as energetic garage rock. The EP closes with a cover of Grapefruit’s “Elevator” that switches to an instrumental at the minute and a half mark. It should be interesting to see what The Green ?uestion Mark does next. In the meantime, Mordecai Smyth has a new release due out in the coming months.
Posted by Terry Flamm at 11:22 PM

Hi Terry - as a Hollies fan, you might be interested in the hollies covers album i'm bringing out on Fruits de Mer. If you'd like to know more, please drop me a line at fruitsdemer7@hotmail.com - cheers, Keith