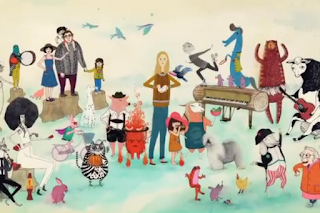 Congratulations to The Lennys, who are celebrating 10 years of performing with a bash tonight at Danny’s On Douglas in Elgin. Admission is $5, the music starts at 9:00 PM.

Today’s Chicago Tribune picked up a story from Reuters concerning a new animated tribute to the late photographer/musician Linda McCartney. Sir Paul re-recorded “Heart Of The Country” from his Ram album to go with the clip, which the Cartoon Brew website and The Mirror have reported is part of a TV commercial for the Linda McCartney Foods company. My only complaint is that the video, which shows Linda doing what she likes best--taking pictures, spending time with children and animals, and playing music--is far too short.

Many of us familiar with the Chicago area music scene were saddened to learn that Mike Braam, from the band The Braam Brothers, recently suffered a stroke. His brother and band mate, Scott, broke the news on Facebook. The overwhelming response of support and prayers has no doubt been appreciated by the Braam family. We’re all hoping Mike has a quick and full recovery.

John Wicks of The Records noted on Facebook this week that he’s been having writing sessions with Debbi Peterson of The Bangles. That sounds like an interesting collaboration, and it could result in some live performances, according to an additional comment by Wicks. By the way, “That Girl Is Emily,” by John Wicks And The Records, is one of the very best tracks on International Pop Overthrow Volume 14.

Danstock, a benefit concert honoring Chicago-based musician-producer Dan Stock, will be held on Thursday, February 7th at Lincoln Hall in Chicago. General admission is $20; a VIP package costs $100. There will be live performances by the bands Board Of  Governors, Farkus, Nature Show, and Carta Marina, as well as a silent auction. All proceeds will benefit the Robert H. Lurie Comprehensive Cancer Center. Doors open at 7:00 PM, bands start at 8:00 PM. Lincoln Hall is located at 2424 N. Lincoln Avenue.

Georgina Flood, the Dublin-based artist known for creating amazing portraits of The Beatles, has been invited to American Ireland Fund’s 3rd Annual Green Gala in Chicago. The event will be held March 2nd, on the 99th floor of Willis Tower (or Sears Tower, as we locals still insist on calling it.)

The Postelles’ upcoming U.S. tour includes a date at Bottom Lounge in Chicago on February 25th. Other dates include Toledo, New York, Boston, and Washington, DC.

Kevin Lee & The Kings have a record release show on tap for their latest CD, Breakout, April 26th at the Elbo Room. Breakout will be available for purchase on April 23rd.

Good Ol’ Freda, the documentary about Beatles Fan Club secretary Freda Kelly, will have its world premiere at the South By Southwest Film Festival on March 9th. Good Ol Freda had a successful run on Kickstarter, but the documentary’s makers are still in need of more financial support. Donations can be made via the Southern Documentary Fund.

Look what I started. After my story on Dolly Varden ran in the January issue of the Illinois Entertainer, the Chicago alt rock/country band has been written up in Time Out Chicago, The Chicago Tribune, and The Chicago Sun-Times. Actually, I’m sure those stories were in the works long before my profile was published. But it’s good to see Dolly Varden getting some well-deserved publicity. The band has a CD release party for its latest effort, For A While, tomorrow night at City Winery in Chicago.