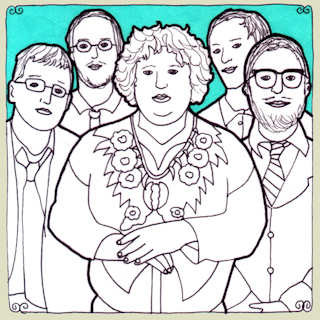 No one could accuse The Sw!ms of taking themselves too seriously or of getting stuck in a musical rut. The Philadelphia-based band leaps from one genre to another on its debut, Ride The Blueberry Winter. Guitarist-vocalist Brian Langain sounds like he’s singing with a perpetual smirk as he leads his band mates through 16 catchy tunes with twisted lyrics.

“Blood In The Lanai” makes a couple’s attempt to get away with murder seem whimsical, thanks to a finger-snapping melody and Phillip Reynolds Price’s Farsifa organ playing. Price also brings that sound to the power pop of “We Need. . .Lava,” but evokes Deep Purple on “Feast Of Flames.” The Sw!ms incorporate strings for “Clean Escape” while “Depth Charge” sounds like it arrived during the original British Invasion. Ride The Blueberry Winter closes on an energetic note with “Upstate Milkmaid.”
Posted by Terry Flamm at 9:27 PM